Not Burning Bright | The Indian Express

Not Burning Bright | The Indian Express 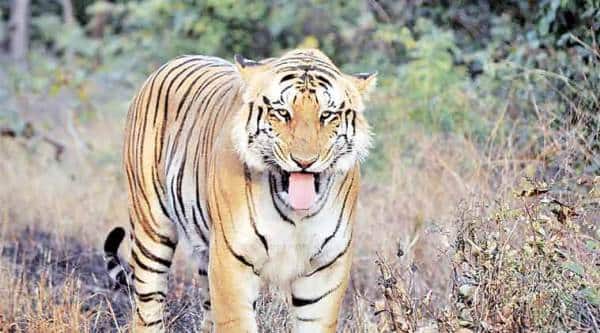 The tigress was shot after it killed six people around Yavatmal. (Express Photo)


Rajesh Gopal
The tiger is in the news, and yet again for the wrong reasons. We have lost two of our national animals to targeted killings in two rich landscapes — Yavatmal (Maharashtra) and Dudhwa (Uttar Pradesh). The big cats were victims of human-tiger interface conflict.
India is in a leadership position on the tiger front with almost 70 per cent of the global tiger population. We pioneered tiger conservation with Project Tiger and by conserving 2.4 per cent of our geographical area as tiger reserves. Why, then, do we find ourselves in such conflict situations repeatedly? The answer is not far to seek. Our tiger reserves, national parks and sanctuaries exist only as islets in a vast sea of human, cattle and unsustainable land use. The stakeholders are many in this heterogeneous mosaic, from primary (local people) to secondary (government departments) and tertiary (business groups, semi-urbanscape). Urbanisation and growth agendas alter landscape dynamics, which has a cascading effect on the ecological dynamics of wildlife. This results in ecological dislocation of sorts, wherein endangered wild animals like tigers either cause distress or land themselves in trouble.
Consider the statistics: India’s 3.28 million sq km land area amounts to 2.4 per cent of the planet’s geographical area. But we have almost 17 per cent of the world’s human population and 16 per cent of global livestock. Our per capita forest is just 0.064 ha compared to the global average of 0.64 ha, which partly explains the forest resource dependency of a large number of rural people. India’s 668 protected areas add up to 14 per cent of her forest area and 4.9 per cent of her geographical area. Of these, 50 protected areas are tiger reserves. Against this backdrop, we hold two-thirds of the global tiger population, the largest population of Asiatic elephants and so on. Barring protected areas, our forests are not very rich. And the concessions in our forests have caused overuse and abuse of resources. Loss of forest productivity in terms of forage for wild herbivores has meant that the bulk of our forests cannot sustain medium-sized wild herbivores like deer, megaherbivores like elephants or big cats like tigers.
In fact, successive assessments have revealed that tigers are largely confined to their source areas (core areas of tiger reserves) and their fringes (buffers). The bulk of other forests in most of India’s tiger states have practically lost their habitat value owing to excessive biotic pressure. Consequently, agriculture and cash crops beyond protected areas readily lure wild pigs and other preys, which in turn lure big cats. The inevitable outcome is “conflict of interface” between wildlife and humans, which cause distress to people. And once wild animals earn a pest value, they get trapped in snares or succumb to revenge or avoidance killings, more often than not through a silent method of poisoning using pesticides. This “interface” is further influenced by urbanisation, rail and road transport infrastructure and intensive operations like mining or special economic zones — part of the growth agenda in any developing country.
The truth is, human-wildlife interface is here to stay. While there can be no “co-existence” with tigers or elephants, a “co-occurrence” agenda with a proactive management control is available. The National Tiger Conservation Authority (NTCA) has brought out several Standard Operating Procedures (SOPs) to deal with various challenges of the human-tiger interface. An incapacitated tiger or leopard has to be captured on priority. A prime animal straying close to human settlements requires active monitoring and translocation to suitable habitat. For example, tigers were shifted from the fringes of Bandhavgarh to Satpura. All this requires 24×7 monitoring using technology, management of corridors, building up the frontline capacity, creating village teams for reporting wild animal presence, and, an intersectoral portfolio at the landscape level akin to the “master plan” envisaged for an eco-sensitive zone.
Human-tiger interface management demands proactive measures. One cannot allow a big cat to get habituated and then brutally eliminate it. It is a tragic end for our national animal, and a complete travesty of the responsibility reposed on foresters and wildlife experts.
The writer is secretary general of the Global Tiger Forum and former chief of NTCA
Publicado por salud equitativa en 6:54