Is Excessive Sovereign Debt a Threat to Peace?

Print | Send by email
Boudewijn Mohr* is a former UNICEF country programme and operational management specialist who travelled across 36 countries on the African continent. He is also a former senior international corporate banker in New York, and author of the recently-released “A Destiny in the Making: From Wall Street to UNICEF in Africa”. 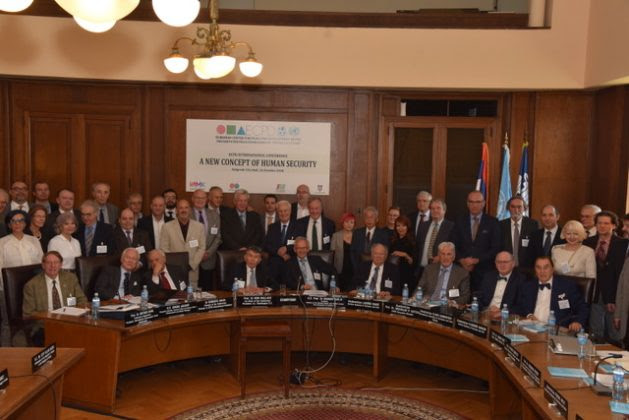 Opening day of the Annual Conference of the European Center for Peace and Development, City Hall, Belgrade, 26 October 2018
BEAUNE, Burgundy, France, Nov 7 2018 (IPS) - Some 30 years ago, the international banks were afloat with petrodollars, deposited by the oil exporting countries. The banks in turn stepped up lending to Latin America, in a big way. The new branch of Société Générale in New York where I was working at the time followed suit rapidly building up its portfolio, as the bank needed to make loans to get its branch off the ground.
Latin America was not my territory; my clients were French companies establishing subsidiaries in the United States. But when in 1982 I witnessed the panic in New York surrounding the implosion of Mexico’s debt, I wondered; and then began to write about it in a renowned Dutch newspaper in Holland, also offering ideas for solving the debt overhang.
I simply failed to grasp why commercial banks, in their eagerness to make loans, would lend so excessively, as they themselves must have known that such loans carried great risks. The banks probably did so willy-nilly, following in the footsteps of the International Monetary Fund (IMF).
At that time, the IMF was trying to help redress large balance of payment deficits of countries in Latin America through imposing stiff austerity measures, curbing inflation and trying to rekindle growth.
Today the IMF does not wince pumping 57 billion dollars into Argentina, a questionable step, and if only for weakening its own capital base in exchange for an excessive sovereign loan.
Given Argentina’s history, a portion of the loan unlikely may never be repaid, would need to be re-phased or simply forgiven. Their president says that chance is “zero”. The IMF now needs a major capital injection that may not be so easy to negotiate this time around, according to the Financial Times.
Has then nothing changed since the 1980s?
Now if a sovereign debt crisis can be proven to threaten essential social and economic rights of populations and thus might constitute a threat to peace in that country and the sub-region, can the Security Council intervene on the basis of R2P? What is the correct point to intervene? When there are signs that excessive debt is threatening peace, could the Security Council intervene pre-emptively?

Not a whole lot in any case. But in my mind something important did change compared to 30 years ago: the world’s money supply today is unimaginably massive. You could call it a bubble of money in circulation; and that means that all that floating money, like the petrodollars of the past, needs to find a home, ergo loans to those countries that have less of it.

Poverty the ultimate threat facing humanity
Most researchers now agree that poverty is the ultimate threat facing humanity, and not only in the developing world. Everything bad emanates from it. Today poverty has increased to unbearable levels for many, a result of conflicts, climate change and rising food prices.
Today’s poverty reduction strategies now include provisions for the poor. This approach is rooted in UNICEF’s tireless campaign for economic adjustment with a human face in the ‘80s under the leadership of UNICEF’s Richard Jolly and his team of economists, and was enthusiastically endorsed by Jim Grant.
The proposal was to shield the poor and vulnerable from the worst effects of the austerity measures through strong social protection and safety nets. It is encouraging to note that Christine Lagarde pledged for more flexible measures in IMF lending that would include strong provisions to protect the most vulnerable.
This intention should be properly institutionalised and respected by her successors. For now, inequality in every aspect of life continues unabated; you are all familiar with the statistics.
Sovereign debt as a threat to peace
In 2012 the Max Planck Research Institute published a discussion paper with the most telling title “Sovereign debt crises as threats to the peace nations”. Its author, Matthias Goldmann, a senior research fellow, found that more reliable data than before enable researchers to point to a correlation between sovereign debt and the risk of armed conflict or even civil war. I have seen this in West and Southern Africa.
Sovereign debt reduces the ability of the state to adequately provide basic services to the most vulnerable, such as health and education services. I have witnessed in Africa that countries in pre-conflict situations have had declining budget allocations for health and education, far below internationally established norms (10% for health and 25% for education).
Beginning in the 1980s, poverty increased steadily in Côte d’Ivoire. World prices of cacao were steadily declining; and conflict in the form of protests and strikes began to rear its ugly head.
I was stationed in Abidjan when it got worse, with demonstrating university students, the university closed, burnt-out cars and soldiers roaming the streets in hijacked vehicles. It took 10 years for the civil conflict to end. In the end the country was exhausted and essentially bankrupt.
After the peace accords of 1992 Mozambique had no trouble finding loans and grants. At the 1995 Consultative Group Meeting in Paris, over 1 billion dollars was raised, a huge sum for its time. In the late 1990s Mozambique’s south developed fast with several huge investments from South Africa, for example a gigantic aluminum smelter near Maputo and upgrading of road and rail network. It was double-digit growth.
But the north, traditionally marginalised, stayed further behind. Not surprisingly, many years later the conflict flared up again between Frelimo and Renamo in the centre and north of the country.
In Rwanda, sovereign debt increased massively in the early 1990s. A structural adjustment programme imposed harsh austerity measures, but military expenditures were exempted. Public services collapsed with cuts in health and education expenditures. Development aid and foreign loans were channelled towards financing the military.
The army swelled to 40,000 troops. Clearly something bad was at hand. But nobody wanted to know. Ethnic tensions, already high in this small and overpopulated country, rose significantly, and then imploded into genocide. Rwanda’s sovereign debt was the worst debt trap the world had ever seen.
When Michel Camdessus retired from the IMF, he warned that poverty would “undermine societies through confrontation, violence and civil disorder”. This, I believe has always been so throughout history, but we paid lip service to change.
With all the problems our planet faces, inequality and poverty should not be the most difficult problems to solve once and for all. After all, states have the responsibility to protect its citizens in a human way, as adopted in 2006 in a unanimous resolution, R2P for short.
To note that R2P does not deny the right to use the military option as a last resort. What is new though is that the UN Security Council in case of a grave violation of this responsibility to protect its citizens, for example genocide, may decide to move into a sovereign nation.
Now if a sovereign debt crisis can be proven to threaten essential social and economic rights of populations and thus might constitute a threat to peace in that country and the sub-region, can the Security Council intervene on the basis of R2P?
What is the correct point to intervene? When there are signs that excessive debt is threatening peace, could the Security Council intervene pre-emptively? Goldmann argues that the Security Council might decide to intervene if there are additional factors, such as ethnical, racial, or structural inequality. These factors usually deteriorate as a result of economic hardship.
And lastly, how would the Security Council relate to and work with the major sovereign debt lender, the IMF, in pre-empting these threats to peace? Intriguing questions which beg for urgent answers.
*Prior to his stint with UNICEF, Boudewijn Mohr was a senior international corporate banker in New York, first with Chase Manhattan Bank in Wall Street and later at Societe Generale branch in New York City. This article is based on an address to the annual conference of the European Centre for Peace & Development in Belgrade last month. The theme of the conference was “A New Concept of Human Security.”