Illegal immigrants to be apprehended and would not be released: Donald Trump | The Indian Express

Illegal immigrants to be apprehended and would not be released: Donald Trump | The Indian Express

Illegal immigrants to be apprehended and would not be released: Donald Trump

The policy speech days ahead of the crucial midterm poll comes because of a caravan, estimated to be comprising between 5,000-7,000 people, from three Latin American countries, El Salvador, Honduras and Guatemala. 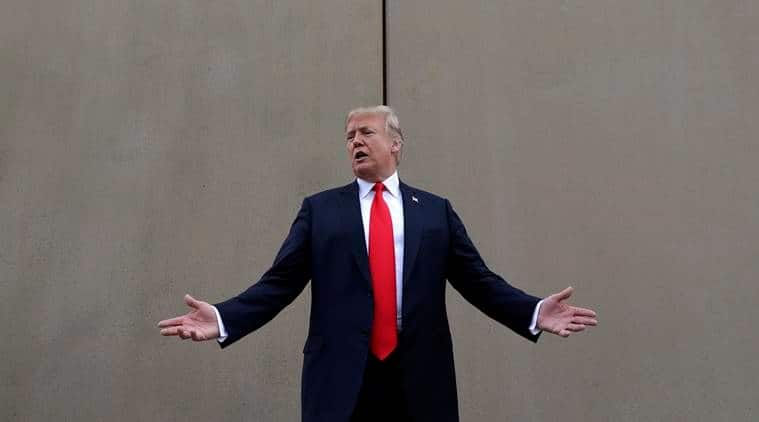 Trump has deployed military at the Southwestern border to stop them. (AP Photo/Evan Vucci, File)
President Donald Trump has said illegal immigrants trying to enter the United States would now be apprehended at the border and, unlike the current practice, would no longer be released.
Announcing a significant change in the current catch-and-release policy for illegal immigrants, Trump said Thursday these illegal immigrants would be released only after a US court pronounces its judgement on their asylum application. If negative, they would be deported to their original country.
“We are not releasing them into our country any longer. They will wait for long periods of time. We’re putting up massive cities of tents; the military is helping us incredibly well,” Trump said in a major policy speech on illegal immigrants.
The policy speech days ahead of the crucial midterm poll comes because of a caravan, estimated to be comprising between 5,000-7,000 people, from three Latin American countries, El Salvador, Honduras and Guatemala. Trump has deployed military at the Southwestern border to stop them.
“At this very moment, a large well-organised caravan of migrants are marching towards our southern border. Some people call it an invasion. It’s like an invasion. They have violently overrun the Mexican border. You saw that two days ago,” he said.
Trump said such caravans would not be allowed and they should turn back as they were “wasting their time”, suggesting they should apply to come into the country. “We hope nothing happens, but if it does, we are totally prepared,” he added.
Observing that the current policy of catch-and-release is a laughing stock all over the world, Trump vowed that he would not allow them any longer. “We’re not allowing them in and we’re not releasing and we’re not doing any of the things that were done for so many years that really are terrible for our country.”
“We have thousands of tents. We have a lot of tents. We’re going to hold them right there. We’re not letting them into our country. And then, they never show up, almost, it’s like a level of three per cent.
“They never show up for the trial. So, by the time their trial comes, they’re gone… Nobody knows where they are. But we know where a lot of them are and they’re going to be deported,” the president said.
Trump said there were around 700,000 people inside the country awaiting adjudication of their claims. “Most of these people we have no idea how they got there, why they got there, and the number is actually going to be a much larger number as we look at all of the data,” he said, adding that the overall number could be between 10-20 million people.
Asserting that there has been a “staggering” increase in asylum claims since 2010, Trump attributed it to the smugglers and traffickers, who know how to game the system.
“There’s a lot of professionalism taking place. And there seems to be a lot of money passing. And then, all of a sudden out of the blue, these big caravans are formed and they start marching up. They’ve got a long way to go.”
Publicado por salud equitativa en 5:21