Brazilians Decide on a Shift to the Right at Any Cost 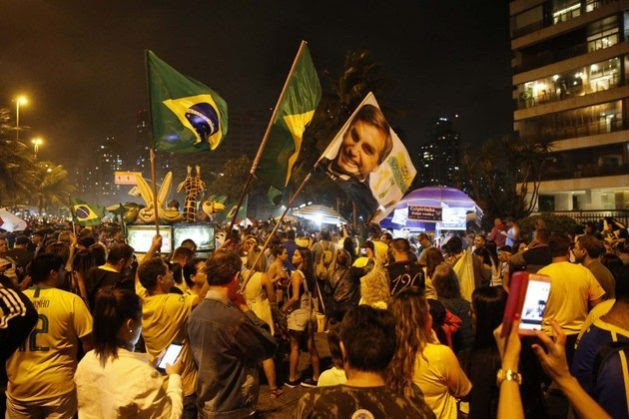 Supporters of president-elect Jair Bolsonaro celebrate his triumph in the early hours of Oct. 29, in front of the former captain's residence on the west side of Rio de Janeiro. The far-right candidate garnered 55.13 percent of the vote and will begin his four-year presidency on Jan. 1, 2019. Credit: Fernando Frazão/Agencia Brasil
RIO DE JANEIRO, Oct 29 2018 (IPS) - Voters in Brazil ignored threats to democracy and opted for radical political change, with a shift to the extreme right, with ties to the military, as is always the case in this South American country.
Jair Bolsonaro, a 63-year-old former army captain, was elected as Brazil’s 42nd president with 55.13 percent of the vote in Sunday’s runoff election, heading up a group of retired generals, such as his vice president, Hamilton Mourão, and others earmarked as future cabinet ministers. He takes office on Jan. 1.
His triumph caused an unexpected political earthquake, decimating traditional parties and leaders.
The Bolsonaro effect prompted a broad renovation of parliament, with the election of many new legislators with military, police, and religious ties, and right-wing activists.
His formerly minuscule Social Liberal Party (PSL) is now the second largest force in the Chamber of Deputies, with 52 representatives. The country’s most populous and wealthiest states, São Paulo, Minas Gerais and Rio de Janeiro, elected PSL allies as governors, two of whom had no political experience.
Brazil thus forms part of a global rise of the right, which in some countries has led to the election of authoritarian governments, such as in the Philippines, Turkey, Hungary and Poland, or even the United States under Donald Trump.
Bolsonaro’s chances of taking his place in the right-wing wave only became clear on the eve of the first round of elections, on Oct. 7.
Little was expected of the candidate of such a tiny party, which did not even have a share of the national air time that the electoral system awards to the main parties. His political career consists of 27 years as an obscure congressman, known only for his diatribes and outspoken prejudices against women, blacks, indigenous people, sexual minorities and the poor.
But since the previous presidential elections in 2014, Bolsonaro had traveled this vast country and used the Internet to prepare his candidacy.
Early this year, polls awarded him about 10 percent of the voting intention, which almost doubled in August, when the election campaign officially began.
That growth did not worry his possible opponents, who preferred him as the easiest adversary to defeat in a second round, if no candidate obtained an absolute majority in the first. The idea was that he would come up against heavy resistance to an extreme right-wing candidate who has shown anti-democratic tendencies. 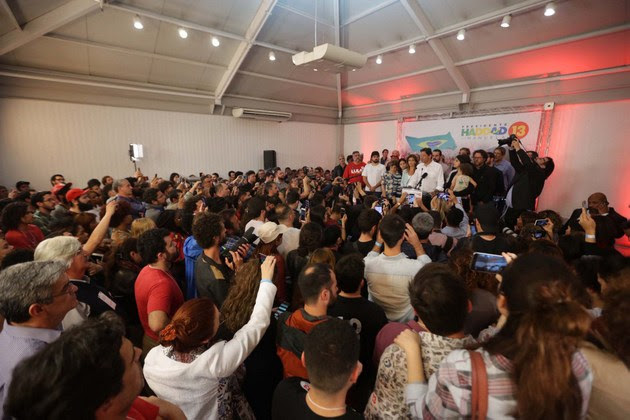 Fernando Haddad, the candidate of the leftist Workers Party, promised his supporters, after his defeat in the Oct. 28 elections, that as an opposition leader he would fight for civil, political and social rights in the face of Brazil’s future extreme right-wing government. Credit: Paulo Pinto/Public Photos
But this was no ordinary election. The poll favorite was former president Luiz Inácio Lula da Silva (2003-2011), whom the leftist Workers’ Party (PT) insisted on running, even though he had been in prison on corruption charges since April, and was only replaced on Sept. 11 by Fernando Haddad, a former minister of education and former mayor of São Paulo.
Five days earlier, Bolsonaro had been stabbed in the stomach by a lone assailant during a campaign rally in Juiz de Fora, 180 km from Rio de Janeiro.
The attack may have been decisive to his triumph, by giving him a great deal of publicity and turning him into a victim, observers say. It also allowed him to avoid debates with other candidates, which could have revealed his weaknesses and contradictions.
But two surgeries, 23 days in a hospital and then being confined to his home, due to a temporary colostomy, prevented him from participating in election rallies. So the social media-savvy candidate focused on the Internet and social networks, which turned out to be his strongest weapon.
The massive use of WhatsApp to attack Haddad aroused suspicions that businessmen were financing “fake news” websites, thus violating electoral laws, as reported by the newspaper Folha de São Paulo on Oct. 18. The electoral justice system has launched an investigation.
The recently concluded campaign in Brazil triggered a debate about the role of this free instant messaging network and “fake news” in influencing the elections.
The social networks were decisive for Bolsonaro, who started from scratch, with practically no party, no financial resources, and no support from the traditional media. The mobilisation of followers was “spontaneous,” according to the candidate.
Brazil, the largest and most populous country in Latin America, with 208 million people, is one of the five countries in the world with the most social media users, with 120 million people using WhatsApp and 125 million using Facebook.
But these tools were only successful because the former army captain managed to personify the demands of the population, despite – or because of – his right-wing radicalism.
He presented himself as the most determined enemy of corruption and of the PT, whose governments from 2003 to 2016 are blamed for the systemic corruption in politics and the errors that caused the country’s worst economic recession, between 2014 and 2016.
As a military and religious man, recently converted to an evangelical church, he swore to wage an all-out fight against crime, a pressing concern for Brazilians, and said he would come to the rescue of the conventional family, which, according to his fiery, and often intemperate, speeches, has been under attack by feminism and other movements.
He seduced business with his neoliberal positions, represented by economist Paulo Guedes, presented as a future minister.
The promise to reduce the size of the state and cut environmental taxes, among other measures, brought him the support of the agro-export sector, especially cattle ranchers and soybean producers.
The economic crisis combined with high crimes rates, added to a wave of conservatism in the habits and customs of this plural and open society, galvanised support for Bolsonaro, while offsetting worries about his authoritarian stances or his inexperience in government administration.
Bolsonaro said he would govern for all, defending “the constitution, democracy and freedom…It is not the promise of a party, but an oath of a man to God,” he said while celebrating his victory, announced three hours after the close of the polls.
His speech did little to reassures the opposition, which will be led by the PT, still the largest party, with 56 deputies and four state governors.
A week earlier he said that in his government “the red criminals will be swept from our homeland,” referring to PT leaders. He threatened to jail his rival, Haddad.
In the past he defended the torturers of the military dictatorship and denied that the 1964-1985 military regime was a dictatorship.
His brutal statements are downplayed by his followers as “boastfulness” and even praise his declarations as frank and forthright.
The problem is not the statements themselves, but the fact that they reveal his continued fidelity to the training he received at the Military Academy in the 1970s, in the middle of the dictatorship
He considers the period when generals were presidents “democratic”, since they maintained parliament and the courts, although with restrictions and subject to controls and purges..
Bolsonaro’s victory, with 57.8 million votes, also has the symbolic effect of the absolution of the military dictatorship via elections, to the detriment of democratic convictions