Print | Send by email |En español
In this special series of reports, IPS journalists travel to the border region between Bangladesh and Myanmar to speak with Rohingya refugees, humanitarian workers and officials about the still-unfolding human rights and health crises facing this long-marginalized and persecuted community. 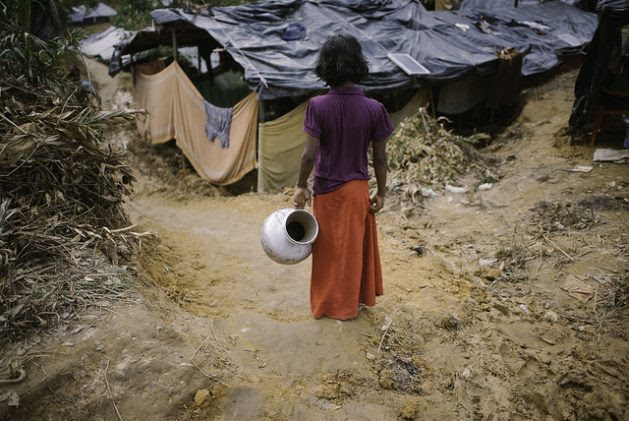 A Rohingya girl goes to fetch water in Balukhali camp, Bangladesh. Credit: Umer Aiman Khan/IPS
COX'S BAZAR, Bangladesh, Jan 3 2018 (IPS) - Hundreds of thousands of Rohingya refugee women from Myanmar are currently living in the cramped camps along Bangladesh Myanmar border. Victims of sexual and physical violence in the Rakhine state, women have been disproportionately affected by this crisis and these women’s perils are far from over in the host country as they continue to face multifaceted challenges.
On condition of anonymity, many Rohingya women interviewed in the camps said that sex work was rampant for camp-dwelling women, with local brokers supplying them to nearby apartments or hotels. Closure of security checkpoints at night makes it easier to undertake these illicit operations. Trafficking is also a major risk posing women and girls.
“A lot of girls are coming who have been separated from families. Many people say to them that they will help them but then these girls disappear,” said Showvik Das, External Relations Officer of the International Organization for Migration (IOM) Bangladesh. While Bangladesh passed laws against trafficking in 2012, they are rarely enforced.
There are over 50,000 pregnant and breastfeeding mothers among the new arrivals who require targeted food and medical assistance. But hospitals with their limited capacity are struggling to meet their needs. Knowledge of contraceptives is also limited and their usage discouraged in the Rohingya community.
Religious sentiment is strong as women and men both cite pregnancy as “God’s wish” and believe that God will help them feed and provide for their children. This is leading to their aversion to use birth control measures and very high birth rates in the camps. 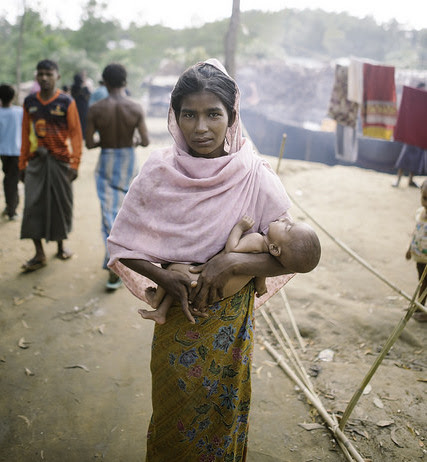 A teenage Rohingya mother with her newborn infant. Credit: Umer Aiman Khan/IPS
“Rohingya women have internalized the idea that they need to have a lot of children because they need to save their race which is being persecuted, “explained said Dr. Lailufar Yasmin, a professor of international relations at the University of Dhaka, who is working in the refugee camps. Rohingya women also have little or no reproductive rights because of cultural norms and because many were married off very young.
Because of the gender discrimination prevalent in Rohingya society and the prestige bestowed upon marriage, unmarried women are particularly vulnerable in the camps and many cases of Gender-Based Violence go unreported because the propagators are husbands. Moreover, some women and girls in the camps who do not have any male guardians are entering what are called “protection marriages” to avoid sexual assault from other males.
A majority of the refugees were married young (at 16 or 17) and while many of them would like to earn a living, only a few are doing so despite having skills, and also have reduced mobility due to prevailing patriarchal and conservative societal norms of the Rohingya population.
While many makeshift toilets have been set up in the camps, women and girls do not feel safe in sanitation facilities, because toilets are not segregated, are unclean and far away from their shelter. Most toilets also do not have any lights, and many women refrain from going to toilets at night due to risk of harassment and resort to open defecation.
Some refugees have put a tarpaulin border next to their kitchen space to shower, washing and bathing next to where they are preparing food. Health experts fear that these unhygienic living conditions could lead to outbreaks of disease.
“While IOM supports private wash and sanitation areas to provide privacy and safety to women in the Bangladeshi community, similar areas are under development in the Rohingya settlements but are hindered by the lack of space,” said Olivia Headon, IOM’s Information Officer for Emergencies. 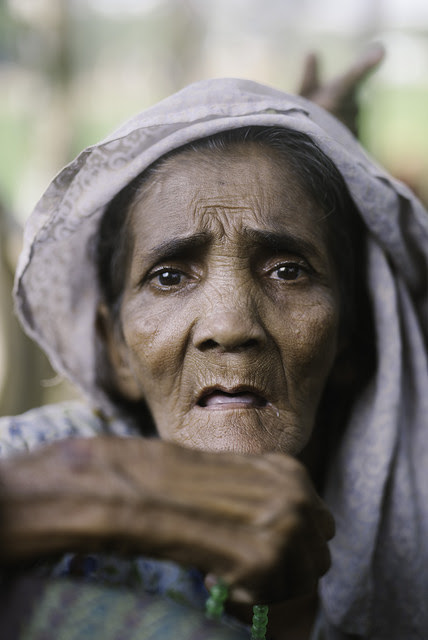 An elderly Rohingya refugee woman. Credit: Umer Aiman Khan/IPS
In a Rapid Gender Analysis assessment conducted by Care in Balukhali Makeshift Camp at Rajapalong Union, Ukhiya Upazila, Cox’s Bazar district, it was found that the community leaders among the refugees are all men. The male children were enrolled in schools or madrasahs (religious educational institutes) in Myanmar whereas the girls typically did not attend schools. Those from affluent families who did were pulled out of school after grade 5, which contributes to increasing their dependence on male relatives.
Given their lack of education, Rohingya women rarely played decision-making or leadership roles but now they are having to do so. “Adult female refugees are outnumbering men, and many women whose husbands died during the military raids are now having to lead the families, which culturally they are not used to,” said Showvik Das of IOM.
For female-headed households with small children and pregnant women who have lost their husbands, lack of education increases their overall vulnerability.
While Myanmar has recently struck a deal with Bangladesh to repatriate the Rohingyas who have fled violence in Myanmar, it will take a very long time to send over half a million refugees and many of them will inevitably end up staying in the camps for a long time. In this context, Rohingya refugee women need significant interventions on water and sanitation, health, reproductive rights and protection from violence.
The series of reports from the border areas of Myanmar and Bangladesh is supported by UNESCO’s International Programme for the Development of Communication (IPDC)