In the Wake of the Millennium Migration | Inter Press Service

In the Wake of the Millennium Migration | Inter Press Service

In the Wake of the Millennium Migration 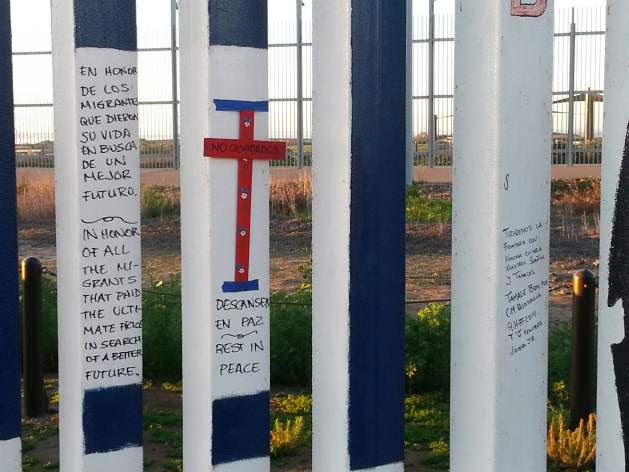 Memorial to migrants who died crossing, on U.S.-Mexico border fence, Tijuana. Credit: Peter Costantini
SEATTLE, Jan 4 2018 (IPS) - A century ago, Italian immigrants told a joke: “Before I came to America, I thought the streets were paved with gold. When I got here, I learned three things: one, the streets were not paved with gold; two, the streets were not paved at all; and three, they expected me to pave them.”
More recently, Mexican and Central American immigrants have been drawn northward by similarly voracious demand for their labor. Starting in the 1980s, a massive exodus of Mesoamericans swelled, cresting around 2000. Let’s call it the Millennium Migration.
The majority of the migrants were Mexican, and most were undocumented. They were driven by powerful push-pull effects: the disastrous 1990s depression in Mexico next door to a boom in the States as its population grayed.
It’s clear that the influx produced modest but tangible benefits for nearly all native-born consumers and workers. Even the six percent of the workforce with no high-school diploma experienced few to no negative effects, suffering mainly from broader forces like automation and outsourcing. In an economic sense, there was no immigration crisis.

The migratory surge built on a century-long tradition: circular migration back and forth to the rhythms of the US and Mexican economies. Many migrants were driven by the Mexican Dream, sending home remittances and returning to build a house there.


This time, though, the economy pulled them into new industries beyond agriculture, like construction and lodging, and towards new areas of the Midwest, Southeast and Northeast.
The influx slowed after the 2000 dot-com crash, and ended with the bursting of the housing bubble and the resulting Great Recession. Since 2008, slightly more undocumented people have gone back to Mexico than have entered the U.S.
The Millennium Migration was the largest in U.S. history in absolute terms. It left Latinos as the biggest minority group with 16.3 percent of the population, and shifted demographic and political balances in many areas.
Nearly a decade later, it’s clear that the influx produced modest but tangible benefits for nearly all native-born consumers and workers. Even the six percent of the workforce with no high-school diploma experienced few to no negative effects, suffering mainly from broader forces like automation and outsourcing. In an economic sense, there was no immigration crisis.
Millennium immigrants avoided areas of unemployment, and gravitated towards places with plentiful low-wage jobs. If they could not find work, they usually moved on to look elsewhere.
Most undocumented workers lacked the education and English to compete with natives. They often segmented into parallel, complementary labor markets. And they tended to “bump up” natives into jobs requiring better communications skills.
Most labor and community organizations have welcomed immigrants as allies. The infrequent cases of immigrant-native workplace friction have nearly always been fomented by unscrupulous employers. Undocumented workers forced to live in fear and insecurity are much more vulnerable to management pressures to accept lower wages and worse working conditions. The best way to protect immigrants and native workers, most advocates agree, is to join forces to defend everyone’s human and labor rights.
Those rights, under international law and the U.S. Constitution, are nearly the same for immigrants as for citizens. Yet the immigration system makes it difficult for many immigrants to exercise them. The Inter-American Commission on Human Rights has ruled twice against the U.S. government for discriminating against Mexican workers. And the United Nations Special Rapporteur for the Human Rights of Migrants has criticized the U.S. for biased and inhumane treatment of immigrants, especially children, and denial of due process for them.
Entering the country without papers is not a crime. It’s an administrative infraction similar to parking overtime or trespassing for a benign purpose. Most of us are no less “illegal”: we routinely exceed speed limits or commit other minor violations.
Over recent decades, though, demagogues like pundit Lou Dobbs and ex-sheriff Joe Arpaio have incubated a nativist and racist constituency by scapegoating immigrants. Now the Trump administration has made the West Wing a bouncy house for bigots, who are lighting the neo-Nazis’ and Ku Klux Klan’s torches. 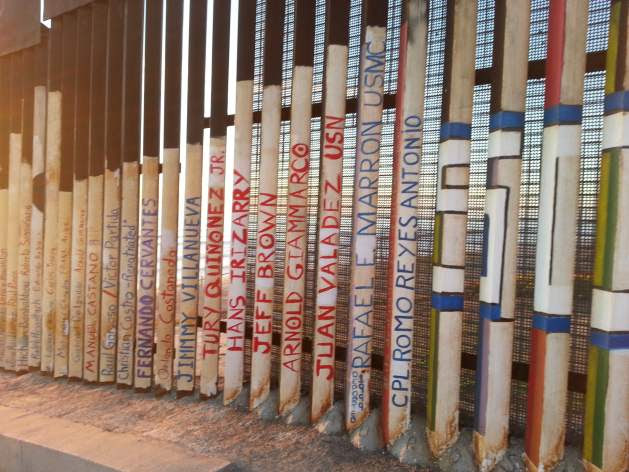 Names of migrants who died crossing, on U.S.-Mexico border fence, Tijuana. Credit: Peter Costantini
A half-century-long escalation of unjust laws and repressive enforcement – dubbed “Juan Crow” – has manufactured “illegals” by criminalizing immigration and militarizing the border. Juan Crow set quotas for Mexicans so low that it left them no practical way to migrate legally. It legislatively twisted simply re-entering the country and other minor misdemeanors into phony “aggravated felonies”, punishable by prison and deportation. And it continually feeds a guaranteed stream of non-criminals through a judicial assembly line into abusive private prisons, whose owners bankroll their congressional enablers.
To the kids who skip school because they’re afraid that their parents will be taken away while they’re gone, this persecution must feel a lot like a police state. To those imprisoned for non-crimes, the detention centers must feel a lot like a gulag.
Juan Crow has multiplied the border enforcement budget many times. It has not been very effective at keeping out immigrants, but it has raised the costs in money and lives by pushing crossers out into the Sonoran Desert.
The gold-plated iron fist has also effectively backstopped and subsidized Mexican organized crime. The narcos now tax or control most crossings. Trafficking, kidnapping and extorting migrants may be a bigger profit center for some than drugs. To avoid them, many crossers either overstay visas or cross concealed at a legal port of entry.
The increased dangers and costs have also forced many migrants to stop circulating. This has created a paperless but deeply rooted diaspora of over 11 million. Two-thirds of them have lived here for more than 10 years, and nearly half of these own houses. More than four-fifths of their children are U.S. citizens, while many of the rest are Dreamers.
Today, shrinking demographic and economic pressures in Mexico make another mass migration improbable. More non-Mexicans than Mexicans are now detained at the border, both in much reduced numbers. And China and India have passed Mexico as the leading sources of new immigrants.
The Millennium Migration has enriched the “gorgeous mosaic” that we’re still struggling to become. Yet its realities are continually distorted by restrictionist immigrant-bashing.
We expected the migrants to pick our crops, build our houses and clean our hotel rooms. But they did much more: they became part of our communities and economies. A decade later, those millions without papers have earned a freeway to citizenship, starting with the Dreamers and their families.
Minimal human decency – and enlightened self-interest – demand that we dismantle Juan Crow. These pilgrims merit paths out of the desert that let them reunite families and reestablish circular migration responsive to needs north and south of the border. Safeguards should prevent employers from taking advantage of immigrant or native workers.
Mexican-American comedian George Lopez said that when people ask him how he feels about Trump’s proposed wall, he tells them, “You know what? We’ll get over it.”
At a recent gathering, a man in a cowboy hat put it more bluntly: “Aquí estamos y no nos vamos, y si nos sacan, nos regresamos.” – “Here we are, and we’re not leaving, and if they kick us out, we’ll come right back.”
Peter Costantini is an analyst and writer based in Seattle. For the past three decades, he has written about migration, labor, Latin America and international economics for Inter Press Service and other news sources. He is currently embedded as a volunteer with immigrant-rights groups.
This commentary is based on a heavily footnoted and referenced paper, available for download from: http://www.huffingtonpost.com/entry/59dffb37e4b09e31db9757cd