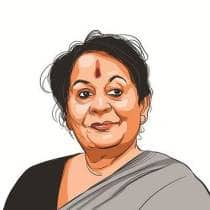 India’s cultural richness and the wide expanse of its spiritual knowledge and icons, are important pillars in Modi’s approach to diplomacy.
In May this year, during the customary banquet hosted by Indonesian President Joko Widodo for Prime Minister Narendra Modi, members of the visiting delegation were surprised to find a small box next to each dinner plate. Inside each box was a small figurine, depicting a famous character of the Ramayana.
This gesture, in many ways, is reflective of the spotlight that PM Modi has been able to cast afresh, on the legacy of Lord Rama.
The same day, President Widodo and Modi had jointly inaugurated a kite exhibition in Jakarta, which featured themes from Indian texts including the Ramayana.
Indonesia, of course, is one of the members of ASEAN, with whom India has forged close links as part of its Act East policy. At the India-ASEAN Commemorative Summit in New Delhi in January this year, Modi said that the Ramayana continues to be a valuable shared legacy in the ASEAN region and the Indian subcontinent. He mentioned the Ramayana Festival with troupes from ASEAN countries, organised by India, to showcase our common cultural heritage.
In fact, the dance drama Rama Hari, based on the Ramayana, was also part of the opening ceremony of the ASEAN Summit in Manila, in the Philippines, in 2017.
The legend of Queen Suriratna, originally of Ayodhya, who travelled to Korea in the first century AD, and married the Korean King Suro, has been repeatedly referred to by the prime minister, both during his public engagements, as well as in private conversations with visiting Korean delegations.
In May 2015, during Modi’s visit to South Korea, this special relationship between Ayodhya and Korea became part of the joint statement issued on the occasion. The two sides agreed to upgrade the monument for Queen Suriratna in Ayodhya as a joint project. India also invited Korea to participate in a seminar on the subject “Shared Heritage as New Variable in the Indo-Korean Relations: Historicising the Legend of Princess from Ayodhya and its Legacy”.
The Ayodhya link with Korea has found mention in his interaction with Korean business leaders, as well as with the Indian community in Korea.
On a special invitation from Modi, the First Lady of the Republic of Korea, Kim Jung-Sook, was an honoured guest at the Diwali celebrations in Ayodhya this year. The occasion was also special, as it marked the ground-breaking ceremony for the new memorial of Queen Suriratna in Ayodhya.
Spiritual links between India and Nepal have been a constant factor in Modi’s interactions with the leadership of that country. His visit to Janakpur, the birthplace of Sita, in May 2018, marked the launch of the Nepal-India Ramayana Circuit, which connects Ayodhya and Janakpur with other sites associated with the Ramayana. Modi also announced Rs 100 crore for the development of Janakpur. At a civic reception, the prime minister remarked that India and Nepal have shared close ties for ages. “This is the place of Maa Janaki, without whom Ayodhya is incomplete,” he said in his remarks to the people of Janakpur. Indeed, the two towns were linked by a sister-city agreement between India and Nepal in 2014.
In Colombo, March 2015, in his address to the parliament of Sri Lanka, Modi reflected on the many strands of the relationship between the two countries. Dwelling on the spiritual links between India and Sri Lanka, he recalled the Ramayana trail in Sri Lanka.
During a pathbreaking visit to Central Asia in July 2015, the prime minister had presented to President Nursultan Nazarbayev of Kazakhstan, a set of books relating to religions born in India. Among the books was a Persian translation of Valmiki’s Ramayana in Nastaliq script. Speaking at a conference in Tehran in May 2016, on the theme “India and Iran, Two Great Civilisations,” the prime minister noted that the Ramayana has seen over a dozen translations in Persian.
Modi has been a strong proponent of the importance of soft power in the rise of nations. India’s cultural richness and the wide expanse of its spiritual knowledge and icons, are important pillars in his approach to diplomacy. And, who better than Lord Rama to connect India and the world!
The writer is a Rajya Sabha MP
Publicado por salud equitativa en 4:30