The Chinese economy has grown so fast for so long now that it is easy to forget how unlikely its metamorphosis into a global powerhouse was, how much of its ascent was improvised and born of desperation. Aerospace workers, wearing Long March-style uniforms, hold a flag in Yan’an in the Shaanxi province of China. (Source: The New York Times)
By Philip P. Pan
In the uncertain years after Mao Zedong’s death, long before China became an industrial juggernaut, before the Communist Party went on a winning streak that would reshape the world, a group of economics students gathered at a mountain retreat outside Shanghai. There, in the bamboo forests of Moganshan, the young scholars grappled with a pressing question: How could China catch up with the West?
It was the autumn of 1984, and on the other side of the world, Ronald Reagan was promising “morning again in America.” China, meanwhile, was just recovering from decades of political and economic turmoil. There had been progress in the countryside, but more than three-quarters of the population lived in extreme poverty. The state decided where everyone worked, what every factory made and how much everything cost.
The students and researchers attending the Academic Symposium of Middle-Aged and Young Economists wanted to unleash market forces but worried about crashing the economy — and alarming the party bureaucrats and ideologues who controlled it.
Late one night, they reached a consensus: Factories should meet state quotas but sell anything extra they made at any price they chose. It was a clever, quietly radical proposal to undercut the planned economy — and it intrigued a young party official in the room who had no background in economics. “As they were discussing the problem, I didn’t say anything at all,” recalled Xu Jing’an, now 76 and retired. “I was thinking, how do we make this work?”
The Chinese economy has grown so fast for so long now that it is easy to forget how unlikely its metamorphosis into a global powerhouse was, how much of its ascent was improvised and born of desperation. The proposal that Xu took from the mountain retreat, soon adopted as government policy, was a pivotal early step in this astounding transformation. Members of a tour group participate in a “red tour” of China’s communist history, in Yan’an in the Shaanxi province of China. (Source: The New York Times)
China now leads the world in the number of homeowners, internet users, college graduates and, by some counts, billionaires. Extreme poverty has fallen to less than 1 percent. An isolated, impoverished backwater has evolved into the most significant rival to the United States since the fall of the Soviet Union.
An epochal contest is underway. With President Xi Jinping pushing a more assertive agenda overseas and tightening controls at home, the Trump administration has launched a trade war. Meanwhile, in Beijing the question these days is less how to catch up with the West than how to pull ahead — and how to do so in a new era of U.S. hostility.
The pattern is familiar to historians, a rising power challenging an established one, with a familiar complication: For decades, the United States encouraged and aided China’s rise, working with its leaders and its people to build the most important economic partnership in the world, one that has lifted both nations.
During this time, eight U.S. presidents assumed, or hoped, that China would eventually bend to what were considered the established rules of modernization: Prosperity would fuel popular demands for political freedom and bring China into the fold of democratic nations. Or the Chinese economy would falter under the weight of authoritarian rule and bureaucratic rot.
But neither happened. Instead, China’s communist leaders have defied expectations again and again. They embraced capitalism even as they continued to call themselves Marxists. They used repression to maintain power but without stifling entrepreneurship or innovation. And they presided over 40 years of uninterrupted growth, often with unorthodox policies the textbooks said would fail.
In late September, the People’s Republic of China marked a milestone, surpassing the Soviet Union in longevity. Days later, it celebrated a record 69 years of communist rule. And China may be just hitting its stride — a new superpower with an economy on track to become not just the world’s largest but the largest by a wide margin. Greenhouses filled with bok choy and yellow cabbage abut investment properties and golf courses in Songming in the Yunnan province of China. (Source: The New York Times)
Even as they put the disasters of Mao’s rule behind them, China’s communists studied and obsessed over the fate of their old ideological allies in Moscow, determined to learn from their mistakes. They drew two lessons: The party needed to embrace “reform” to survive — but “reform” must never include democratization.
China has veered between these competing impulses ever since, between opening up and clamping down, between experimenting with change and resisting it, always pulling back before going too far in either direction for fear of running aground.
Many people said that the party would fail, that this tension between openness and repression would be too much for a nation as big as China to sustain. But it may be precisely why China soared.
Bureaucrats who were once obstacles to growth became engines of growth. Officials devoted to class warfare and price controls began chasing investment and promoting private enterprise. Every day now, the leader of a Chinese district, city or province makes a pitch like the one Yan Chaojun made at a business forum in September.
“Sanya,” Yan said, referring to the southern resort town he leads, “must be a good butler, nanny, driver and cleaning person for businesses, and welcome investment from foreign companies.”
It was a remarkable act of reinvention, one that eluded the Soviets. In both China and the Soviet Union, vast Stalinist bureaucracies had smothered economic growth, with officials who wielded unchecked power resisting change that threatened their privileges.
Mikhail Gorbachev, the last leader of the Soviet Union, tried to break the hold of these bureaucrats on the economy by opening up the political system. Decades later, Chinese officials still take classes on why that was a mistake.
Afraid to open up politically but unwilling to stand still, the party found another way. It moved gradually and followed the pattern of the compromise at Moganshan, which left the planned economy intact while allowing a market economy to flourish and outgrow it. 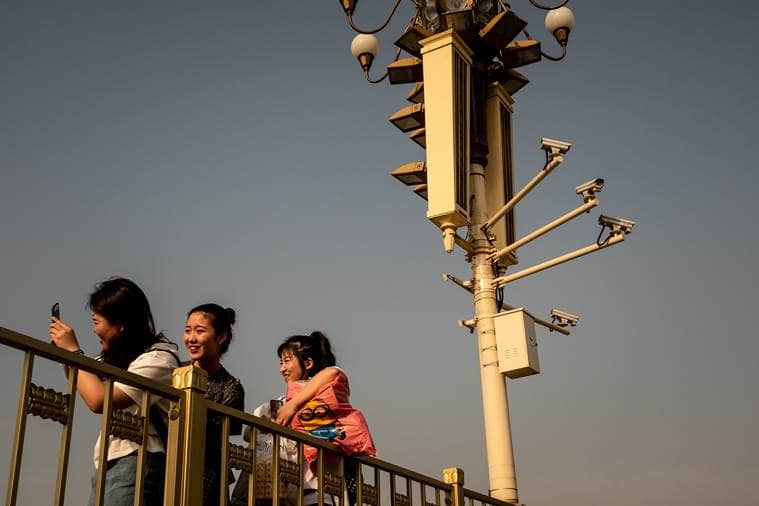 Surveillance cameras in Tiananmen Square in Beijing. (Source: The New York Times)
Party leaders called this go-slow, experimental approach “crossing the river by feeling the stones” — allowing farmers to grow and sell their own crops, for example, while retaining state ownership of the land; lifting investment restrictions in “special economic zones,” while leaving them in place in the rest of the country; or introducing privatization by selling only minority stakes in state firms at first.
“There was resistance,” Xu said. “Satisfying the reformers and the opposition was an art.”
The nation’s long economic boom followed one of the darkest chapters of its history, the Cultural Revolution, which decimated the party apparatus and left it in shambles. In effect, autocratic excess set the stage for Mao’s eventual successor, Deng Xiaoping, to lead the party in a radically more open direction.
That included sending generations of young party officials to the United States and elsewhere to study how modern economies worked. At the same time, the party invested in education, expanding access to schools and universities, and all but eliminating illiteracy. Mainland China now produces more graduates in science and engineering every year than the United States, Japan, South Korea and Taiwan combined.
Another explanation for the party’s transformation lies in bureaucratic mechanics. Analysts sometimes say that China embraced economic reform while resisting political reform. But in reality, the party made changes after Mao’s death that fell short of free elections or independent courts yet were nevertheless significant.
The party introduced term limits and mandatory retirement ages, for example, making it easier to flush out incompetent officials. And it revamped the internal report cards it used to evaluate local leaders for promotions and bonuses, focusing them almost exclusively on concrete economic targets.
These seemingly minor adjustments had an outsize impact, injecting a dose of accountability — and competition — into the political system, said Yuen Yuen Ang, a political scientist at the University of Michigan. “China created a unique hybrid,” she said, “an autocracy with democratic characteristics.”
In December, the Communist Party will celebrate the 40th anniversary of the “reform and opening up” policies that transformed China. The triumphant propaganda has begun, with Xi putting himself front and center, as if taking a victory lap for the nation. President Xi Jinping front and center while a statue of Deng Xiaoping is a distant image in a painting at the Guangdong Museum of Art in Guangzhou, China. (Source: The New York Times)
He is the party’s most powerful leader since Deng and the son of a senior official who served Deng, but even as he wraps himself in Deng’s legacy, Xi has set himself apart in an important way: Deng encouraged the party to seek help and expertise overseas, but Xi preaches self-reliance and warns of the threats posed by “hostile foreign forces.”
In other words, he appears to have less use for the “opening up” part of Deng’s slogan.
Of the many risks that the party took in its pursuit of growth, perhaps the biggest was letting in foreign investment, trade and ideas. It was an exceptional gamble by a country once as isolated as North Korea is today, and it paid off in an exceptional way: China tapped into a wave of globalization sweeping the world and emerged as the world’s factory. China’s embrace of the internet, within limits, helped make it a leader in technology. And foreign advice helped China reshape its banks, build a legal system and create modern corporations.
The party prefers a different narrative these days, presenting the economic boom as “grown out of the soil of China” and primarily the result of its leadership. But this obscures one of the great ironies of China’s rise — that Beijing’s former enemies helped make it possible. The United States and Japan, both routinely vilified by party propagandists, became major trading partners and were important sources of aid, investment and expertise.
China is not the only country that has squared the demands of authoritarian rule with the needs of free markets. But it has done so for longer, at greater scale and with more convincing results than any other.
Growth has begun to slow, which could shake public confidence. The party is investing ever more in censorship to control discussion of the challenges the nation faces: widening inequality, dangerous debt levels, an ageing population.
Xi himself has acknowledged that the party must adapt, declaring that the nation is entering a “new era” requiring new methods. But his prescription has largely been a throwback to repression. “Opening up” has been replaced by an outward push, with huge loans that critics describe as predatory and other efforts to gain influence — or interfere — in the politics of other countries. At home, experimentation is out while political orthodoxy and discipline are in.
In effect, Xi seems to believe that China has been so successful that the party can return to a more conventional authoritarian posture — and that to survive and surpass the United States it must.
Certainly, the momentum is with the party. Over the last four decades, economic growth in China has been 10 times faster than in the United States, and it is more than twice as fast. The party appears to enjoy broad public support, and many around the world are convinced that Trump’s America is in retreat while China’s moment is just beginning.
Then again, China has a way of defying expectations.
Publicado por salud equitativa en 5:12