A noble act: The female writer who fought Nazis and machismo

Selma Lagerlöf not only won the Nobel Prize for Literature, she also saved a fellow laureate from the Nazis 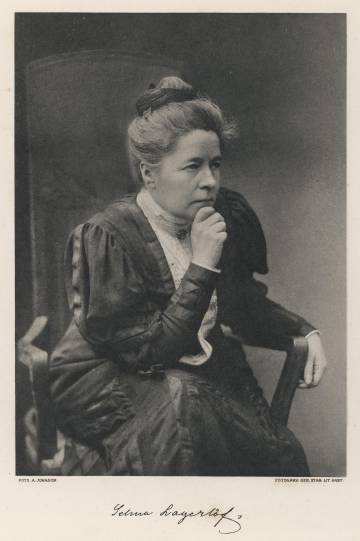 The Swedish novelist, Selma Lagerlöf, in 1909, the year she received the Nobel Prize for Literature. CORDON PRESS


On December 10, 1966, the Jewish-German poet Nelly Sachs received the Nobel Prize for Literature in Stockholm, an award she shared with the novelist Shmuel Agnón. In her acceptance speech, she paid tribute to another Nobel laureate for saving her life. “In the summer of 1939, a German friend came to Sweden to visit Selma Lagerlöf and asked if she could find somewhere for my mother and I to take refuge,” she said. “In the spring of 1940, after several tortuous months, we reached Stockholm. Denmark and Norway were already occupied. The great novelist was no longer here.”
Selma Lagerlöf, “the great novelist” to whom she referred became the first female Nobel laureate after winning the Nobel Prize for Literature in 1909. A writer who works were translated into 50 languages, she died in March, 1940, without knowing whether she had successfully helped the Jewish poet and her mother escape the Nazi death camps. In fact, they escaped by the skin of their teeth on the last plane to Stockholm out of Berlin. The safe conduct order that Lagerlöf secured with the help of the Swedish royal family came a week before they were told to report to a concentration camp, according to Belén Yuste, curator of the Nobel Women’s Exhibition in Madrid which touches on Sachs and Lagerlöf’s friendship.

But while Nelly Sachs escaped, Nazism was to affect her and her writing profoundly. Her romantic view of the world jarred with the Holocaust to such an extent that initially, she stopped working altogether. When her sweetheart disappeared in the concentration camps, she took up her pen again to reflect the horror of the period. Prayer for the Dead Bridegroom dedicated to her murdered lover was the first poem she wrote from Sweden, and was included in the poetry collection O The Chimneys.
Lagerlöf and Sachs never actually met, but their friendship began long before 1940 when Sachs read Lagerlöf’s first novel, The Saga of Gösta Berling. Sachs was just 15 years old at the time and decided to write to the Swedish novelist to express her admiration. Lagerlöf replied and so became one of the pillars of Sachs extensive correspondence.
Later, in 1921, Sachs dedicated her first book Legends and Stories to the Scandinavian who in turn praised the work in a brief postcard: “My most sincere gratitude for such a beautiful book. I myself could not have written better.” Humor and confidence in her abilities were two of Lagerlöf’s trademarks, evident in the 40,000 letters she left behind, according to Elizabeth Lagerlöf, the author’s great-niece and secretary of the Mårbacka Foundation, based in her former home in Sweden.
“She remains a living author on every cultural level,” she says. “They are currently performing her plays in Stockholm and Gothenburg, and in her native region, a theater adapts her novels and performs them for 20,000 visitors each year. She is also a feminist icon; she inaugurated the International Conference for Suffragettes that took place in Stockholm in 1911 and she wrote about strong women who could do the things men did.”
Selma Lagerlöf was born near the Norwegian border in 1858 into a wealthy family that would fall on hard times. At the age of three she would become paralyzed, a condition that prevented her from walking for the next four years and affected her mobility for life. She studied to become a teacher, the only job open to women in Sweden at the time, and taught for 10 years until her first novel The Saga of Gösta Berling allowed her to focus solely on her writing.
“I will be chosen by the Swedish Academy and I will win a Nobel Prize,” she wrote to fellow author and traveling companion, Sophie Elkan. “This shouldn’t worry you.”
Lagerlöf did win the prize, but it didn’t come easily to her. Carl David af Wirsén, who was secretary of the Academy for 29 years blocked her nomination on five occasions. “When her name came up, Wirsén would propose more appropriate names,” says Elizabeth Lagerlöf. “He didn’t like new literature and the fact she was a woman didn’t help. In his opinion, only men should be awarded the Nobel Prize.”
The Saga of Gösta Berling (1891). Her first prose work, this was better received in Denmark than in Sweden. Shortly after its success, Lagerlöf left teaching.
Jerusalem and The Holy City (1901 and 1902). Written after her travels in the Middle East.
The Wonderful Adventures of Nils Holgersson (1906). Included in the Swedish geography curriculum, this is the equivalent of Don Quixote for children.
The Emperor of Portugallia (1914). This novel was inspired by a factual event that happened close to the author’s home.
Marbacka: the Story of a Manor (1922). Memoirs.
Kjell Espmark, a member of the Academy since 1981, confirms this in his book The Nobel Prize In Literature, which charts the history of the accolade. “All modern Swedish literature, from Strindberg to Selma Lagerlöf was marginalized during Wirsén’s time,” he writes. “The work of Selma Lagerlöf is truly in clear contrast to the aesthetic that Wirsén made his own,” he adds, alluding to the magical realism of Lagerlöf’s The Wonderful Adventures of Nils Holgersson.
According to Wirsén, who was tired of fictional autobiography, “Reality and fiction are intertwined at times in the book in a manner that detracts from the story’s objective.”
Selma Lagerlöf did not do fictional autobiography, but she did get a good deal of her plot lines from real life, such as The Emperor of Portugallia in which she tells a story of love, loss and prostitution that happened close to her home in Mårbacka or Herr Arne’s Hoardwhich was inspired by a real crime carried out by a priest’s family and the meeting of the sole survivor with one of the murderers years later. “She wrote about things that happened,” says her great-niece.
The author became a member of the Swedish Academy in 1914, before she even had the right to vote – which came in 1919. From her newly acquired position of influence, she tried to tackle the hostility towards female writers by supporting nominations such as the Italian novelist Grazia Deledda who became a Nobel winner in 1926 and the Spanish writer Concha Espina whose name was put forward 25 times without success. After reading The Metal of the Dead in Swedish, Lagerlöf wrote to tell her that on the strength of this novel alone, she should win the prize.
Nobel Women’s Exhibition is showing in Madrid until March 20.
English version by Heather Galloway.
Publicado por salud equitativa en 6:02