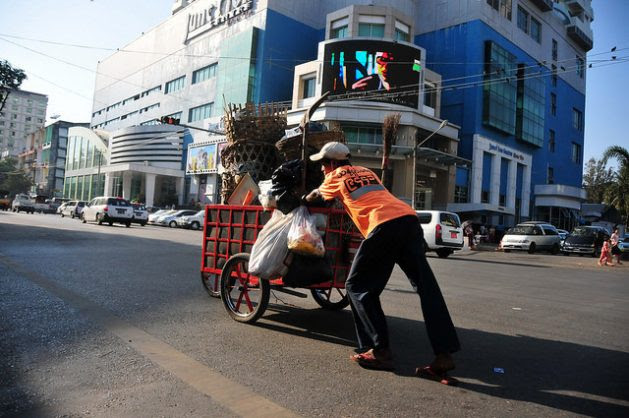 A man pushes a cartful of garbage near a busy intersection in Yangon. The 56-billion-dollar economy is growing at a steady clip of 8.5 percent per annum, but the riches are obviously not being shared equally. Credit: IPS
SYDNEY and KUALA LUMPUR, Jan 23 2018 (IPS) - As the ‘masters of the universe’ gather for their annual retreat at Davos, the World Economic Forum (WEF) has just published its Inclusive Development Index (IDI) for the second time.
After moderating from the 1920s until the 1970s, inequality has grown with a vengeance from the 1980s as neoliberal ascendance unleashing regressive reforms on various fronts.
Sensing the growing outrage at earlier neo-liberal reforms and their consequences, as well as the financial sector bail-outs and fiscal austerity after the 2008-2009 global financial crisis, politicians and business leaders have expressed concerns about inequality’s resurgence.
The record is more nuanced. While national level inequalities have grown in most economies over the last four decades, international income disparities between North and South have actually narrowed, largely due to growth accelerations in much of the latter.
But while income inequality trends have been mixed, wealth concentration has picked up steam, recently enabled by the low cost of credit, thanks to ‘unconventional monetary policies’ in the North.
According to the World Inequality Report 2018, the top 1% in the world had twice as much income growth as the bottom half since 1980. Meanwhile, income growth has been sluggish or even flat for those with incomes between the bottom half and the top 1%. Oxfam’s new Reward Work, Not Wealth report reveals that the world’s wealthiest 1% got 82% of the wealth generated in 2017, while the bottom 50% saw no increase at all!
The world’s 500 richest, according to Bloomberg Billionaires Index, became US$1 trillion richer during 2017, “more than four times” the gain in 2016, as their wealth increased by 23%, taking their combined fortunes to US$5.3 trillion. According to the UBS/PwC Billionaires Report 2017, there are now 1,542 US dollar billionaires in the world, after 145 more joined their ranks in 2016. 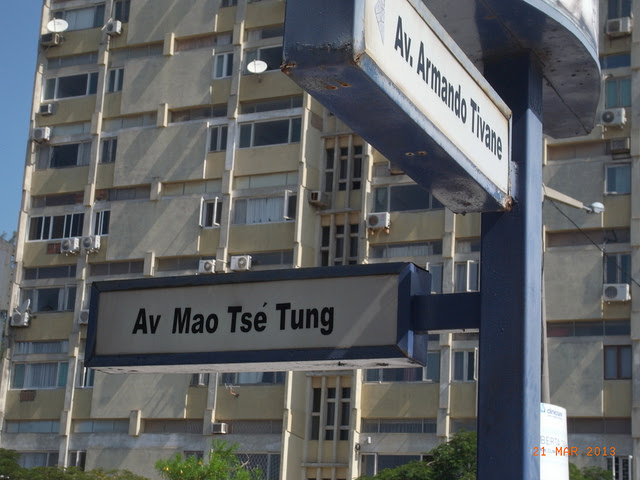 Mozambique’s capital city Maputo has street names after socialist and communist leaders, however, the country has a huge wealth disparity. Credit: IPS
Worsening wealth inequality
Meanwhile, the latest Credit Suisse Report found that the world’s richest 1% increased their share of total wealth from 42.5% at the height of the 2008-2009 global financial crisis to 50.1% in 2017, or US$140 trillion.
It shows that the bottom half together owned less than 1% of global wealth, while the richest 10% owned 88% of all wealth, and the top 1% alone accounted for half of all assets. Thus, global household debt rose by nearly 5% in 2017 despite total wealth increasing by US$16.7 trillion, or 6.4%.
The Report attributes this to uneven asset price inflation with financial asset prices growing much faster than non-financial asset values. Recent unconventional monetary policies of the world’s major central banks contributed to such asset price inflation.
The European Central Bank has acknowledged that quantitative easing (QE) has fuelled asset price inflation. Kevin Warsh, a former US Federal Reserve Board member, has argued that QE has only worked through the ‘asset price channel’, enriching those who own financial assets, not the 96% who mainly rely on income from labour.
An IMF study found that ‘fiscal consolidation’, typically involving austerity, has significantly worsened inequality, depressed labour income shares and increased long-term unemployment.
Another IMF research report shows that capital account liberalization — typically recommended to attract foreign capital inflows without due attention to the consequences of sudden outflows — has generally significantly and persistently increased national-level inequalities.
The World Inequality Report 2018 also observed that rising income inequality has largely been driven by unequal wealth ownership. Privatization in most countries since the 1980s has resulted in negative ‘public wealth’ — public assets minus public debt — in rich countries, even as national wealth has grown substantially. Over recent decades, countries have become richer as governments have become poorer, constraining governments’ ability to address inequality by increasing public provisioning of essential services.
An earlier IMF study also noted that the neoliberal reforms — promoting privatization, cutting government spending, and strictly limiting fiscal deficits and government debt — have also increased economic inequality.
On average, net private wealth in most rich countries rose from 200–350% of national income in 1970 to 400-700% recently as marginal tax rates for the rich and super-rich have fallen. The Oxfam report identifies tax evasion, corporate capture of public policy, erosion of workers’ rights and cost cutting as major contributors to widening inequalities.
The IMF’s recent Fiscal Monitor acknowledges that regressive tax reforms have caused tax incidence to be far less progressive, if not regressive, while failure to tax the rich more has increased inequality. Besides new tax evasion opportunities and much lower marginal income tax rates, capital gains are hardly taxed, encouraging top executives to pay themselves with stock options.

Misleading
It is quite remarkable how increasing wealth concentration has been described and presented to the public. For example, the Allianz Global Wealth Report 2016 has described the trends as ‘inclusive inequality’, claiming a growing global middle class even as inequality has been rising.
Similarly, the Credit Suisse Report argues that wealth distribution is shifting as the world becomes wealthier, thus lowering barriers to wealth acquisition. Increasing wealth and income inequality are thus merely reflecting faster asset accumulation, including the pace at which new millionaires are being created.
Josef Stadler, UBS head of global ultra-high net worth and lead author of the UBS/PwC Billionaires Report 2017, decries “the perception that billionaires make money for themselves at the expense of the wider population” as incorrect, attributing billionaires’ fortunes to the strong performance of their companies and investments.
Besides their philanthropic contributions and patronage of the arts, culture and sports, 98% of billionaires’ wealth are said by him to contribute to society as the world’s super-rich employed 27.7 million people. Rather than making money from their employees’ efforts, billionaires apparently make private welfare payments to them out of the goodness of their hearts!