Tocantins, a River of Many Dams in Central Brazil | Inter Press Service

Tocantins, a River of Many Dams in Central Brazil | Inter Press Service

Tocantins, a River of Many Dams in Central Brazil 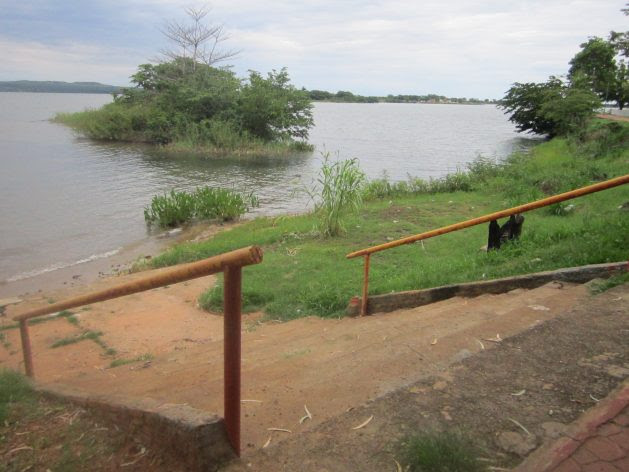 Access stairway to the Tocantins River in the central Brazilian state of Tocantins, which no longer has flowing water since it was dammed to generate electricity, mostly to be used in other parts of the country, and which contributes very little to local development. Credit: Mario Osava / IPS
PALMAS and PORTO NACIONAL, Brazil, Jan 12 2018 (IPS) - Tocantins, the newest of Brazil’s 26 states, which was created in 1988 to seek its own paths to development in central Brazil, fell into the common plight of expanding borders, based on soy and hydroelectricity.
The area owes its name to a river that crosses the state from south to north, but which has been converted into a sequence of dams to generate electricity, almost entirely for other states. With no industries and with a population of just 1.5 million, consumption in this state is very limited.
“The lake is beautiful, but it left us without the tourism potential of the river and the electricity is more expensive for us than elsewhere,” complained journalist and writer Edivaldo Rodrigues, editor-in-chief of the newspaper O Paralelo 13, which he founded in 1987 in Porto Nacional.
The Lajeado hydroelectric power plant, with a capacity of 902.5 megawatts and which is officially named after former member of parliament Luis Eduardo Magalhães, who died in 1998, submerged beaches, crops and houses with its 630 square km reservoir, along a 170-km stretch of the Tocantins river.
“We had beaches in the dry season, islands of white sand that attracted many tourists”, and it was all lost when the water level rose, Rodrigues lamented, at his home in the city’s historical district, a few metres from the shore of the lake.
The journalist, who is the author of 12 books, chronicles, memoirs and novels, is a privileged witness to the transformations in Tocantins, especially in Porto Nacional, the cultural cradle of the state, with a population of about 53,000 people.
His historical novels show the violence of old landowners, the “colonels” appointed by the National Guard, a paramilitary militia that was disbanded in 1922, who dominated the region of Tocantins, as well as the advance in education brought by Dominican priests who came from France in 1886 to spread Catholicism from their base in Porto Nacional.
“They brought knowledge from Europe, they created schools, turning Porto Nacional into a cultural centre, and today a university town, with three universities and students from all over the country,” said the journalist who studied Communication and History in Goiania, capital of the neighboring state of Goiás. 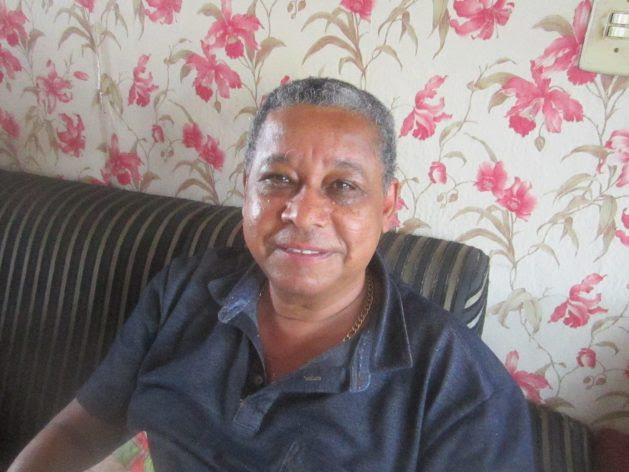 Edivaldo Rodrigues, editor-in-chief of the newspaper O Paralelo 13, from Porto Nacional, a cultural and university centre in central Brazil with a population of 53,000 located on the right bank of the Tocantins River. Credit: Mario Osava / IPS
The river, which was part and parcel of the city, more than doubled in width when it became a lake, but now it is farther away from the population. Now there are ravines between the coastal avenue and where the water starts, accessed only through two stairways.
Some old families from the city were resettled away from the shore of the lake and indemnified, but most of the displaced were peasant farmers who lived on the other side, on the left bank, where the reservoir was extended the most across the plain.
Anesia Marques Fernandes, 59, is one of those victims.
“We lost the river, the beaches, the tourists, the nearby fish and the fertile lands which we sowed in the dry season,” recalled the peasant farmer, who was resettled along with her mother 21 km from the river in 2000, before the reservoir was filled the following year.
“My mother is the one who suffered the most and still suffers today, at 80 years of age,” after having raised her five children on her own in the flooded rural community, Carreira, because her husband died when she was pregnant with their fifth child, Fernandes said.
In the Flor de la Sierra Resettlement community, home to 49 displaced families, the four hectares of land that were given to them are not even a tenth of what they had before, she said. “But the houses are better,” she acknowledged.
The most important thing, however, was community life, the solidarity among “neighbours who helped each other, shared the meat of a butchered cow. We were one big family that was broken up,” she lamented. In the resettlement community there are only three families from her old village. 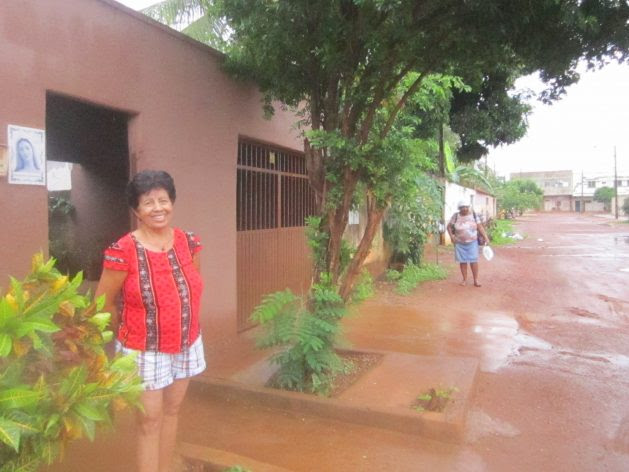 Bernardete Batista de Araujo stands in front of the house where she was relocated in Palmas, together with others displaced by the Lajeado hydroelectric dam in central Brazil. The high walls and a street muddy because of the rain make her miss Vila Canela, her old village on an island that no longer exists on the Tocantins River. Credit: Mario Osava / IPS
That is the same complaint voiced by Maria do Socorro Araujo, a 56-year-old retired teacher, displaced from Canela, a submerged beach community, 10 km from Palmas, the capital of the state of Tocantins.
“The community was fragmented, it dispersed, it forgot its culture, its unity and its way of live,” said Araujo, who was resettled in 2001 on block 508 in the north of Palmas, with her husband and three children.
“We lost our land, tranquillity and freedom, there were no fences there; here we live behind high walls,” complained her neighbour Bernardete Batista de Araujo, referring to the house where she was resettled in the capital.

She is pleased, however, to have a roof over her head, a solid three-bedroom house, better than her rustic dwelling in Canela, which had been rebuilt after the river flooded and destroyed it in 1980.
In her small yard, she now tries to compensate for the loss of the many fruit trees in the village flooded by the reservoir, planting papaya, mango and pineapple.
“The bad thing here is the dust in the dry season and the mud when it rains because of the unpaved roads,” a long-standing complaint by the inhabitants of La Cuadra, who are demanding that the road be paved.
Palmas, with a current population of 290,000, is an artificial city, planned according to the model of Brasilia, with wide avenues and squares to accommodate large numbers of cars and blocks arranged by numbers and cardinal points.
Founded in 1989, it took years of construction before becoming in practice the administrative capital of Tocantins.
Antonio Alves de Oliveira, 63, is proud to have been “the third taxi driver” in Palmas, when the city, in its second year, “had nothing but dust and huge numbers of mosquitoes.”
“Fried fly” was the nickname given to an improvised restaurant, he recalled.
Where Palmas is located, the Tocantins River now has an 8.4-km bridge which crosses the reservoir – almost eight times the width before the construction of the Lajeado dam, 50 km downstream (to the north).
The environmental impact study carried out by Investco, the company that built the Lajeado hydropower plant between 1999 and 2001 and has a concession for 35 years, registered only 1,526 families, of which 997 are rural, directly affected by the dam and reservoir.
But Judite da Rocha, local coordinator of the Movement of People Affected by Dams (MAB), believes that the real number is close to 8,000 families.
Many groups were not recognised as affected, such as the Xerente indigenous people, boatmen, fishermen, potters, dredgers who extracted sand from the river and seasonal workers, such as “barraqueros” who set up stands to sell beach products in the tourist season, she argued.
But the “worst and most complex situation” is that of the Estreito hydroelectric plant, inaugurated in 2012 in the north of the state of Tocantins, with an installed capacity of 1,087 megawatts.
There are “almost 1,000 families displaced and without compensation”, scattered in seven camps, so that the total number of people affected could reach 12,000, according to Rocha.
MAB estimates that there are 25,000 families in total who suffer the consequences of the hydroelectric power plants built in the state of Tocantins, four of which are on the Tocantins River. Added to three other large plants built in other states, the Tocantins River has a generation capacity of 12,785 megawatts.