The Reality of North Korea as a Nuclear Power 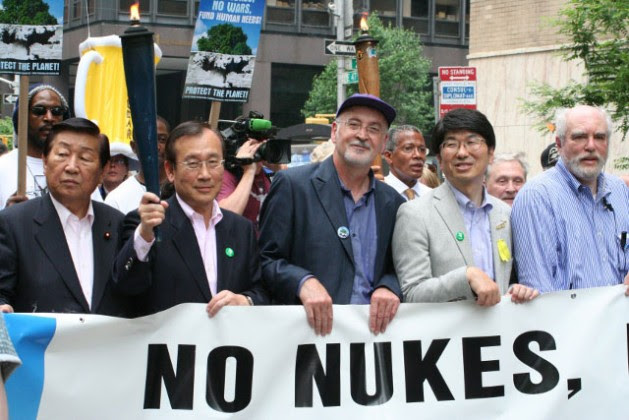 Credit: UN photo
UNITED NATIONS, Jan 11 2018 (IPS) - With a track record of six underground nuclear tests between 2006 and 2017, North Korea is desperately yearning to be recognized as the world’s ninth nuclear power – trailing behind the US, UK, France, China, Russia, India, Pakistan and Israel.
But that recognition seems elusive– despite the increasing nuclear threats by Pyongyang and the continued war of words between two of the world’s most unpredictable leaders: US President Donald Trump and North Korean leader Kim Jong-un.
Arguing that North Koreans have little reason to give up their weapons program, the New York Times ran a story last November with a realistically arresting headline which read: “The North is a Nuclear Power Now. Get Used to it”.
But the world’s five major nuclear powers, the UK, US, France, China and Russia, who are also permanent members of the UN Security Council, have refused to bestow the nuclear badge of honour to the North Koreans.
North Korea, meanwhile, has pointed out that the invasion of Afghanistan and Iraq, and the ouster of Libyan leader Muammar el-Qaddafi, were perhaps facilitated by one fact: none of these countries had nuclear weapons or had given up developing nuclear weapons.
“And that is why we will never give up ours,” a North Korean diplomat was quoted as saying.
Dr M.V. Ramana, Simons Chair in Disarmament, Global and Human Security at the School of Public Policy and Global Affairs, University of British Columbia, told IPS there is, however, hope in the recent placatory moves by North and South Korea.
“I think that the situation can return to a calmer state, although it is entirely possible that this calmer state would involve North Korea holding on to nuclear weapons. I suspect that for the time being the world will have to live with North Korea’s nuclear arsenal,” he added.
“Although that is not a desirable goal, there is no reason why one should presume that North Korea having nuclear weapons is any more of a problem than India, Pakistan, or Israel, or for that matter, China, France, the United Kingdom, Russia, or the United States,” said Dr Ramana, author of The Power of Promise: Examining Nuclear Energy in India, Penguin Books, New Delhi (2012).
“I think the greater problem is the current leadership of the United States that has been making provocative statements and taunts. I think it is for the powerful countries to start the process of calming down the rhetoric and initiate negotiations with North Korea.”
Also, any peace process should be based on reciprocal moves: one cannot simply expect North Korea to scale down its programs without corresponding moves by the United States, he declared.
Jayantha Dhanapala, a former UN Under-Secretary-General for Disarmament Affairs (1998-2003), told IPS there is little doubt that North Korea, (also known as the Democratic People’s Republic of Korea), has acquired a nuclear weapon capability and the means of delivering it to the mainland of the USA.
That this is clearly in defiance of international norms and a violation of international law and Security Council resolutions is also clear, he noted.
Those norms, quite apart from the Nuclear Non-Proliferation Treaty (NPT) and the Comprehensive Test Ban Treaty (CTBT), now include the recently negotiated Treaty on the Prohibition of Nuclear Weapons, or the Nuclear Weapon Ban Treaty, the first legally binding international agreement to comprehensively prohibit nuclear weapons, with the goal of leading towards their total elimination.
It was adopted on 7 July 2017, but neither the USA nor the DPRK have acceded to it, said Dhanapala a former President of Pugwash (2007-17),
He also pointed out that the persistent efforts of the DPRK since the end of the Korean War to conclude a just and equitable peace with the USA have been rebuffed again and again.
“Past agreements and talks both bilateral and multilateral have failed and we are now witnessing the puerile antics of two leaders engaged in the mutual recrimination of two school-yard bullies asserting that one man’s nuclear button is bigger than the other’s while tensions reminiscent of the Cold War build up alarmingly.”
Such escalation reached dangerous proportions at the time of the Cuban Missile Crisis where the historical record proves that the world was saved from nuclear catastrophe by sheer luck.
“We cannot trust to luck anymore,” he warned.
“Some small steps between the two Koreas hold promise of a dialogue beginning on the eve of the Winter Olympics. This must be the opportunity for all major powers to intervene and resume negotiations. The Secretary-General of the UN must act and act now,” he added.
The number of nuclear weapons in the world has declined significantly since the end of the Cold War: down from approximately 70,300 in 1986 to an estimated 14,550, according to the Federation of American Scientists (FAS).

According to US intelligence sources, North Korea’s nuclear arsenal is anywhere between 20 to 50 weapons. The US Defense Intelligence Agency (DIA) estimates a total of over 50 weapons.
Joseph Gerson, President of the Campaign for Peace, Disarmament and Common Security, told IPS that successive North Korean governments have pursued their nuclear weapons program for two primary reasons: to ensure the survival of the Kim Dynasty and to preserve the survival of the North Korean state.
“As Scott Snyder (a Senior Fellow for Korea Studies and Director of the Program on U.S.-Korea Policy Council on Foreign Relations) taught us years ago, there is a logic – potentially deadly as is the case with any nuclear weapons program – to the development of North Korea’s deterrent nuclear arsenal.”
Beginning with the Korean War, the United States has threatened and or prepared to initiate nuclear war against North Korea. These threats have added resonance for North Koreans as a consequence of the United States military having destroyed 90% of all structures north of the 38th parallel during the Korean War.
Gerson said it is also worth noting that in the wake of the 1994 U.S.-DPRK nuclear crisis, North Korea was prepared to trade its nuclear weapons program in exchange for security guarantees, normalization of relations and economic development assistance.
The United States failed to fulfill its commitments under the 1994 Agreed Framework, by refusing to deliver promised oil supplies and endlessly delaying its promised construction of two light water nuclear reactors in exchange for the suspension of the DPRK nuclear weapons program.
In 2000, former U.S. Secretary of Defense William Perry and Secretary of State Madeleine Albright negotiated a comprehensive agreement with North Korea. And President Clinton was to travel to Pyongyang to finalize the agreement, but with the political crisis caused by the disputed outcome of the 2000 Presidential Election, he did not make that trip.
Among the first disastrous orders of business of the Bush Administration was the sabotaging of that agreement. This, in turn, led to North Korea’s first nuclear weapons test, said Gerson, author of “Empire and the Bomb: How the US Uses Nuclear Weapons to Dominate the World”, “The Sun Never Sets…Confronting the Network of U.S. Foreign Military Bases”, and “With Hiroshima Eyes: Atomic War, Nuclear Extortion and Moral Imagination”.
While expectations for the meeting of North and South Korean officials, currently underway, are low, said Gerson, the world should be celebrating South Korean President Moon’s winter Olympic-related diplomatic initiatives and the resulting functional Olympic Truce.
By welcoming North Korean athletes to participate in the Olympics and by postponing threatening U.S.-South Korean military “exercises,” President Trump’s “my nuclear button is bigger than yours” –ratcheting up of dangers of war have been sidelined– he pointed out.
Following his inauguration last year, President Moon announced that he had a veto over the possibility of a disastrous U.S. initiated second Korean War. Having exercised that veto and forced Trump’s hand, he has opened the way for deeper diplomacy and peaceful resolution of the conflict.
Gerson said: “There remains, of course, the danger the Olympic Truce will simply serve as a temporary reprieve, with President Trump, beleaguered by the Muller investigation and seemingly endless scandals, again ratcheting up tensions. Disastrous war remains a possibility should the nuclear monarch opt for a desperate and deadly maneuver in his struggle for political survival.”
There never was, nor will there be, a military solution to the U.S.-North Korean nuclear crisis, and as U.S. military authorities have repeated warned, given Seoul’s proximity to North Korean artillery, even a conventional U.S. military attack against North Korea would result in hundreds of thousands of South Korean casualties and could escalate to uncontrollable and genocidal nuclear war.
The way forward requires direct U.S.-North Korean negotiations, possibly in multi-lateral frameworks like the Six Party Talks, Gerson noted.
As the growing international consensus advocates, resolution of the tensions will necessitate some form of a “freeze for freeze” agreement, limiting North Korea’s nuclear and missile programs in exchange for halting U.S. threats to destroy or overturn the North Korean government and to implement previous commitments to normalization of relations.
With this foundation in place, future diplomacy can address finally ending the Korea War by replacing the Armistice Agreement with a peace treaty and building on numerous proposals for the creation of a Northeast Asian Nuclear Weapons Free Zone.
In the end, Gerson said, the only way to prevent similar nuclear weapons proliferation crises is for the nuclear powers to finally fulfill their Article VI Nuclear Nonproliferation Treaty obligation to negotiate the complete elimination of their nuclear arsenals.
As the Nobel Peace Laureate and senior Manhattan Project scientists Joseph Rotblat warned, humanity faces a stark choice. “We can either completely eliminate the world’s nuclear weapons, or we will witness their global proliferation and the nuclear wars that will follow. Why? Because no nation will long tolerate what it perceives to be an unjust hierarchy of nuclear terror.”
The writer can be contacted at thalifdeen@aol.com