The Data Revolution Should Not Leave Women and Girls Behind

Print | Send by email |En español
Jemimah Njuki is an expert on agriculture, food security, and women’s empowerment and works as a senior program specialist with IDRC. She is an Aspen Institute New Voices Fellow. 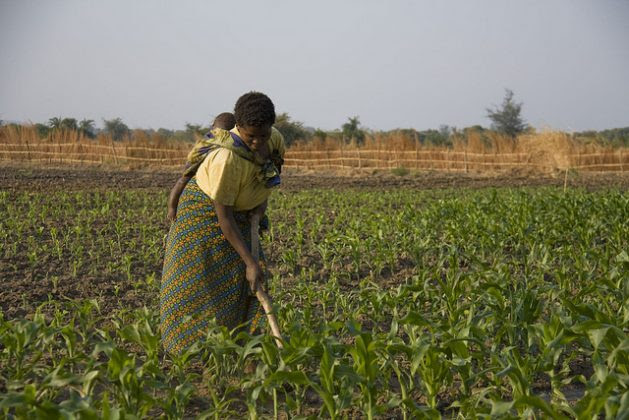 Most African farmers are women. Credit: IPS
OTTAWA, Canada, Jan 9 2018 (IPS) - If there is one political principle that has been constant throughout the history of human civilization it is the fact that land is power. This is something that is particularly true, and often painfully so, for women who farm in Africa.
Though women in Africa are far more likely to farm than men, they are also much less likely to have secure rights to the land where they cultivate crops and they typically hold smaller plots of inferior quality.
As a researcher who studies the role of gender in agriculture, I want to do my part to address this injustice, because when women have stronger rights to land, their crop yields increase and they have higher incomes and more bargaining power within the household. Research has shown that stronger land rights leads to other benefits such as better child nutrition and improved educational attainment for girls.
But as I delve deeper in to the issue, I frequently encounter another political constant, which is the fact that information is power. And one manifestation of the chronic neglect of women in agriculture is the lack of data that would help illuminate and address their plight.
For example, the Bill & Melinda Gates Foundation has launched the Goal Keepers Initiative, which is making a concerted effort to track progress toward achieving the United Nation’s Sustainable Development Goals. Examining the first ever report on the program launched just a few weeks ago, the first thing I did was scroll down to the section on Goal 5, “Achieve Gender Equality and Empower all Women and Girls.” When examining the indicators related to gender, which include tracking the percentage of women who have secure land rights, I kept encountering the phrase, “Insufficient data” in big, bold red capital letters!
Without data, it is impossible to track progress or identify policies and interventions that are achieving gender equality. In order to develop solutions—whether around land rights or the many other challenges women and girls face–we need data that highlights current problems and assesses their impact.
A good example of how sex-specific data fosters progress is in financial inclusion. Sex-specific data gives us information about who is accessing which kind of products, which channels they use and what the gaps are. Being aware of these gaps is essential to overcome them, and this is impossible without data sets for both men and women. In Rwanda, use of sex-specific data has led to the targeting of groups who are excluded from the financial system, raising the financial inclusion index rise from 20 percent in 2008 to 42 percent in 2012.
A report by Data2X, an initiative of the United Nations Foundation, indicates that although close to 80 percent of countries globally regularly produce sex-specific statistics on mortality, labor force participation, and education and training, less than one-third of countries separate statistics by sex on informal employment, entrepreneurship (ownership and management of a firm or business) and unpaid work, or collect data about violence against women. This leads to an incomplete picture of women’s and men’s lives and the gaps that persist between them, which constrains the development of policies and programs to address these gaps.
A key challenge to collecting these data sets is investment. We need financial investments to collect data on the situation of women and girls at different levels –local, national and international. A study carried out by the UN Statistics Division in collaboration with the UN regional commissions in 2012, showed that out of 126 responding countries only 13 percent had a separate budget allocated to specific gender statistics, 47 percent relied on ad-hoc or project funds and the remaining 39 percent had no funds at all.
In 2016, the Bill & Melinda Gates Foundation invested US $80M to improve the collection of sex specific data. In Uganda, the World Bank Living Standards Measurement Study is collaborating with the United Nations Evidence and Data for Gender Equality initiative and the Uganda Bureau of Statistics to collect and analyze asset ownership by different members of households.
It would help to know for example what assets women own so as to develop programs and policies that benefit both men and women and that close persistent gender gaps. At Canada’s International Development Research Centre, we are supporting sex-specific reporting and registration of vital and civil events—including births and deaths to help track progress on such indicators as women’s reproductive health and child mortality.
Globally, there is still no available data on how many women own customary land. One challenge is that the rules, norms, and customs which determine the distribution of land and resources are embedded in various institutions in society—family, kinship, community, markets, and states. For example, when I was visiting Mali in 2012, I attended a village’s community meeting where I witnessed the village chief grant a local women’s group a local deed so they could farm together and raise their incomes. But there was no formal document or record.
Without this data, when land is privatized or formalized, women often lose control of customary land. For example in post-independence Kenya, Uganda and Zimbabwe, during the land registration and formalization experience, lack of data and consideration of women in customary land rights led to the documentation of land in the name of the head of the household only, often a man. This gave the man authority to use, sell, and control the land, with women losing the customary access and rights that they had previously enjoyed.
International agencies and governments must commit to investing in collecting more data on women and girls. Closing this gender data gap is not only useful for tracking progress of where we are with the SDGs, but it can also point to what interventions are working, and what needs to be done to accelerate progress towards gender equality and the empowerment of women and girls.
What gets measured matters, and what matters gets measured. Women and girls matter.