Religion: Between ‘Power’ and ‘Force’ 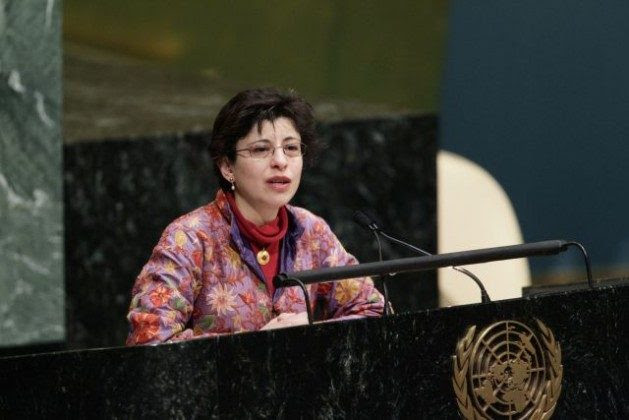 Azza Karam. Credit: UN photo
UNITED NATIONS, Jan 3 2018 (IPS) - In 1994, Dr. David R. Hawkins wrote a book positing the difference between power and force (Power vs. Force: The Hidden Determinants of Human Behavior – the latest revised version came out in 2014).
Basing his hypothesis on the science of kinetics, Dr. Hawkins made a case for how human consciousness – and the physical body – can tell the difference between power, which is positive, and force, which is not. An example of power over force is illustrated as Gandhi’s non-violent resistance to the force of British colonialism.
Power is slow, steady, and long lasting, whereas force is moving, fast, and tends to both create counter-force, and eventually exhaust itself. Dr. Hawkins’ argument, often labeled as ‘spiritual’, lays the groundwork for how faith, or belief, is a source of power, and, to coin a phrase, it’s all good.
Historically, from the first century’s Lucretius, to 16th Century Machiavelli, to 18th Century’s Voltaire and David Hume, through to modern day Richard Dawkins and others among the New Atheists, it has long been argued, in different ways, that religion —particularly as manifested through religious institutions — is, in Hawkins’ terms, more pertinent to the realm of ‘force’.
And yet, it is still largely towards these religious leaders, and religious institutions, that the international community (now increasingly shepherded by many governments) is looking, as a means to (re)solve a myriad of human development and humanitarian challenges.
These challenges include poverty, migration, environmental degradation, children’s rights, harmful social practices, ‘violent extremism’ (often narrowed down only to the religious variety), and even armed conflict. Religious leaders, and occasionally faith-based organizations, are posited as the panacea to all these, and more.
The notion of partnering with religious actors as one of the means to mobilise communities (socially, economically and even politically), to seek to (re)solve longstanding human development challenges, has evolved significantly inside the United Nations system over the last decade. But the intent of the outreach from largely secular institutions towards religious ones, has changed in the last couple of years.
The rationale for partnership, as argued by the diverse members of the United Nations Interagency Task Force on Partnership with Religious Actors for Sustainable Development (or the UN Task Force on Religion, for short) in 2009, was based on certain facts: that religious NGOs are part of the fabric of each civil society, and therefore bridging between the secular and religious civic space is key to strong advocacy and action for human rights (think the Civil Rights Movement in the USA); that religious institutions are the oldest and most long-standing mechanisms of social service provision (read development including health, education, sanitation, nutrition, etc.); and that some religious leaders are strong influencers (if not gatekeepers) of certain social norms – including especially some of the harmful social practices that hurt girls and women.
Thus, the UN Interagency Task Force developed guidelines for engagement with religious actors, based on a decade of learning, consultations and actual engagement among 17 diverse UN entities and almost 500 faith-based NGOs. These guidelines stipulate, among other aspects, engagement with those who are committed to all human rights. Thus, there is to be no room for cherry-picking, or so-called ‘strategic’ selectivity about which rights to honour, and which to conveniently turn a blind eye to.
When the specific religious actors who are committed to all human rights, are convened, even around one development or humanitarian issue, the ‘power’ in the convening space is palpable, and the discourse can – and does – move hearts and minds. This was evident as far back as 2005 when UNDP started convening Arab faith leaders around the spread of HIV.
Some of the very same religious leaders who held that HIV was a ‘just punishment for sexual promiscuity’, when confronted with the scientific realities of the spread of the disease, and its very human consequences on all ages and all social strata, signed on to a statement which remains one of the most ‘progressive’ (relatively speaking) in religious discourse of the time, and some went so far as to ask for forgiveness from those living with HIV among them.
The ‘power’ of religious actors who are systematically convened together for the human rights of all, at all times, was repeatedly witnessed over the course of several UN initiatives over the years, in different countries, and at the global level. Notably, UNFPA and UNICEF convened religious leaders with other human rights actors, to effect a social transformation as witnessed in a number of communities committed to stopping the practice of Female Genital Mutilation (FGM) in several sub-Saharan African countries.
The latest event took place as 2017 wound to an end, in December, when the UN Office for the Special Advisor on the Prevention of Genocide, after two years of convening religious actors – using the UN systems vetted partners and it’s Guidelines — as gatekeepers against hate speech, responded to a request from some of the religious leaders themselves, to come together from several South Asian countries (including Myanmar, Thailand, Pakistan, India and Sri Lanka).
Sharing respective experiences of protecting religious minorities and standing in solidarity with the rights of all, across religions and national boundaries, created a sense of shared purpose, and above all, of possibility, hope – and yes, of power. Not a minor achievement in a time of a great deal of general confusion and sense of instability around, and with, religion.
Can the same be said of convening religious actors who are prepared to uphold a particular set of rights, even at the expense of ignoring other rights, ostensibly for the ‘greater good’? Or are we then, very possibly, inadvertently mobilising the ‘force’ of religion?