The demonstrations, the largest to strike Iran since its disputed 2009 presidential election, have seen five days of unrest across the country and a death toll of at least 13. 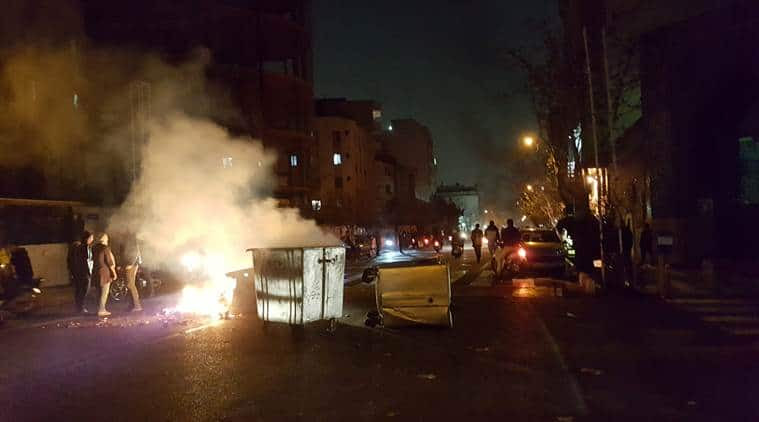 People protest in Tehran, Iran December 30, 2017 in in this picture obtained from social media. (Photo via Reuters)

Protests across Iran saw their most violent night as “armed protesters” tried to overrun military bases and police stations before security forces repelled them, killing 10 people, Iranian state television said Monday.
The demonstrations, the largest to strike Iran since its disputed 2009 presidential election, have seen five days of unrest across the country and a death toll of at least 13 with the slaying of a police officer announced late Monday.
The protests began Thursday in Mashhad over economic issues and have expanded to several cities, with some protesters chanting against the government and the supreme leader, Ayatollah Ali Khamenei. Hundreds of people have been arrested.
Read | What is happening in Iran? Here is everything you need to know
Iranian state television aired footage of a ransacked private bank, broken windows, overturned cars and a firetruck that appeared to have been set ablaze. It said 10 people were killed by security forces during clashes Sunday night.
“Some armed protesters tried to take over some police stations and military bases but faced serious resistance from security forces,” state TV said.
In a later report, state TV said killed six people were killed in the western town of Tuyserkan, 295 kilometers (185 miles) southwest of Tehran, and three in the town of Shahinshahr, 315 kilometers (195 miles) south of Tehran. It did not say where the 10th person was killed.
Earlier Monday, the semi-official ILNA news agency quoted Hedayatollah Khademi, a representative for the town of Izeh, as saying two people died there Sunday night. He said the cause of death wasn’t immediately known, though authorities later described one of the deaths as the result of a personal dispute.
Late Monday, Iran’s semi-official Mehr news agency said an assailant using a hunting rifle killed a policeman and wounded three other officers during a demonstration in the central city of Najafabad, about 320 kilometers (200 miles) south of Tehran. The slaying marked the first security force member to be killed in the unrest.
Two protesters also were killed during clashes late Saturday in Doroud, some 325 kilometers (200 miles) southwest of Tehran in Lorestan province, authorities have said.
On Sunday, Iran blocked access to Instagram and the popular messaging app Telegram used by activists to organize.
President Hassan Rouhani acknowledged the public’s anger over the Islamic Republic’s flagging economy, though he and others warned that the government wouldn’t hesitate to crack down on those it considers lawbreakers.
That was echoed Monday by judiciary chief Ayatollah Sadegh Larijani, who urged authorities to confront rioters, state TV reported.
“I demand all prosecutors across the country to get involved and the approach should be strong,” he said.
Rouhani also stressed Monday that Iran “has seen many similar events and passed them easily.”
US President Donald Trump, who has been tweeting in support of the protesters, continued into the New Year, describing Iran as “failing at every level despite the terrible deal made with them by the Obama Administration.”
“The great Iranian people have been repressed for many years,” he wrote. “They are hungry for food & for freedom. Along with human rights, the wealth of Iran is being looted. TIME FOR CHANGE!”
While some have shared Trump’s tweets, many in Iran distrust him because he has refused to re-certify the nuclear deal and his travel bans have blocked Iranians from getting US visas.
Israeli Prime Minister Benjamin Netanyahu, calling the protesters “brave” and “heroic,” said in a video posted to YouTube on Monday that the protesters sought freedom, justice and “the basic liberties that have been denied to them for decades.”
He criticized the Iranian regime’s response to the protests and also chided European governments for watching “in silence” as the protests turn violent.
British Foreign Secretary Boris Johnson issued a statement late Monday saying “there should be meaningful debate about the legitimate and important issues the protesters are raising and we look to the Iranian authorities to permit this.”
“We regret the loss of life that has occurred in the protests in Iran, and call on all concerned to refrain from violence and for international obligations on human rights to be observed,” he said.
German Foreign Minister Sigmar Gabriel also said in a statement that “after the confrontation of the past days it is all the more important for all sides to refrain from violent action.” Both countries were part of the 2015 nuclear deal.
Iran’s economy has improved since the nuclear deal, which saw Iran agree to limit its enrichment of uranium in exchange for the end of some international sanctions. Tehran now sells its oil on the global market and has signed deals to purchase tens of billions of dollars’ worth of Western aircraft.
That improvement has not reached the average Iranian, however. Unemployment remains high, and official inflation has crept up to 10 percent again. A recent increase in egg and poultry prices by as much as 40 percent, which the government has blamed on a cull over avian flu fears, appears to have been the spark for the economic protests.
While the protests have sparked clashes, Iran’s paramilitary Revolutionary Guard and its affiliates have not intervened as they have in other unauthorized demonstrations since the 2009 election.
It wasn’t immediately clear if the Guard would change its posture given the reported attacks on police stations and military bases. In Tehran on Monday, streets were calm, though a heavy police presence was noticeable.
Brig. Gen. Massoud Jazayeri , the Guard commander and deputy chief of staff for Iran’s military, said Monday that Trump’s support of the protesters “indicates planning by the U.S. for launching a new sedition in Iran.”
For all the latest World News, download Indian Express App
Publicado por salud equitativa en 9:13