India rolls out the red carpet for ASEAN | The Indian Express

India rolls out the red carpet for ASEAN | The Indian Express

India rolls out the red carpet for ASEAN

It shows the heft that New Delhi has gained over the last few years as a credible geo-strategic partner of the ASEAN, and also reflects a reaction to the aggressive posture adopted by China in the South China Sea 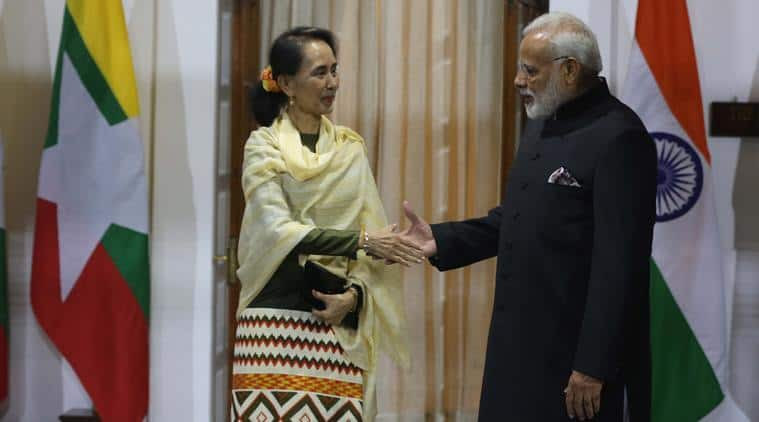 Prime Minster Narendra Modi (R) with Myanmar’s State counselor Aung San Suu Kyi. (Source: Express photo by Renuka Puri)
The presence of all ten Heads of State from ASEAN countries in New Delhi on the occasion of the 69th Republic day of India as joint chief guests is an unprecedented event, significant in many respects. Although the ostensible occasion is to commemorate the 25th anniversary of the India-ASEAN engagement, geopolitics has played a big role in all of them coming together to the Indian capital at the same time.
It shows the heft that New Delhi has gained over the last few years as a credible geo-strategic partner of the ASEAN, and also reflects a reaction to the aggressive posture adopted by China in the South China Sea. Riding on strong and robust economic and infrastructure capabilities, China has proceeded to occupy disputed and unoccupied islands in an important ocean with key sea lanes of communication over the past few years even as the ASEAN and the rest of the world watched.
Follow Republic Day 2018 LIVE Updates
In fact, the scale and speed of the “China creep” in the South China Sea, their land reclamation, militarisation and their population and administration by a determined Chinese state which took place in the background of a reluctant engagement of the US in the Pacific has left the ASEAN and its partners stunned and helpless. China has managed to divide the ASEAN by offering lucrative economic incentives and liberal lines of credit to less developed countries like Laos and Cambodia and using them to block consensus on conference outcomes stressing the centrality of ASEAN, and a combined ASEAN stand opposing the militarisation and occupation of the disputed islands in the South China Sea.
Even though the Chinese lost the case against the Philippines on its claims on the islands and its activities in the South China Sea, the Philippines has not pressed ahead with its implementation in view of a divided ASEAN. Asean today seeks support from all its strategic partners in the evolving security architecture in the region, and in developing a Code of Conduct in the South China Sea.
While China looms large, India has a full agenda of cooperation of its own in mind . This agenda is driven by the three Cs – Commerce , Connectivity and Culture. India’s trade figures with ASEAN have been lacklustre – $71 billion last year compared to a whopping $450 billion trade which China has with the ASEAN. India has signed an FTA on trade in goods and investment and services with the 10-member group. India has ensured that ASEAN walks in tandem in the journey of mutual development and prosperity. (File photo)
While the FTA on trade in goods is in place, two ASEAN countries are yet to ratify the FTA on services and investment. If the FTA on services and investment enters into force in the near future this could open up new vistas of cooperation.
In a related but significant development, on January 23 in Tokyo, 11 negotiating partners of the Trans-Pacific Partnership, minus the USA, agreed to go ahead and sign this agreement which will create a powerful trade bloc. Many ASEAN countries are part of this agreement, requiring higher standards in trade and manufacturing.
India has not been part of TPP negotiations, but has been taking part in RCEP negotiations, alongside all ten ASEAN countries, China, Australia, New Zealand, Japan and Republic of Korea. In these negotiations, India has been unsuccessfully trying to gain concessions in services, and has been accused of slowing down the negotiations. The TPP signature on March 11 could spur Indian negotiators to rethink strategy on RCEP. Staying away from RCEP in the light of developments on TPP could create difficulties for Indian exports.
As far as Connectivity is concerned, Indian flagship projects with ASEAN like the Trilateral highway and the Kaladan multimodal project which will help in the develoment of India’s North-East States have suffered due to time lags. There are few takers for the $1 billion line of credit announced by Prime Minister Modi in 2015 for physical and digital connectivity with ASEAN, but India’s Quick Impact projects of lesser amounts have been a big success across the CMLV countries and ASEAN.
India and ASEAN will do well to finalise a Maritime Cooperation pact which will result in joint ventures in shipping and transhipment initiatives. Serious consideration must be given to connect India’s eastern seaboard ports with Dawei in Myanmar as well as others in Thailand to cut down on time and costs of delivery. Air connectivity needs to be improved with direct flights to Indonesia, Laos, Cambodia and Philippines which are still reached from India via some other destination. India has opened up its skies to ASEAN in18 Tier-2 cities, and ASEAN airlines like Air Asia could exploit these routes successfully. Indian tourism to ASEAN has increased by leaps and bounds but ASEAN tourists to India only account for 3% percent of the total tourists into India. India will do well to strengthen infrastructure at the six important sites in Uttar Pradesh and Bihar for Buddhist tourism, create comfortable infrastructure and facilities and strengthen connectivity with Buddhist tourist sites in Andhra Pradesh, Maharashtra and Madhya Pradesh.
At the time of writing this piece, Prime Minister Modi has just proposed that India and Asean celebrate 2019 as the year of tourism. He has also proposed use of digital capabilities of India for connecting the rural areas in Asean.
India has done its part in the promotion of culture, people to people contacts, youth, think tanks, and eminent persons. ASEAN can look at India at a destination of quality education, provided the two sides can progress on mutual recognition of degrees for employment purposes and awareness is spread in all countries – especially the CLMV countries – on education facilities and opportunities in India.
This Summit has an important retreat segment on maritime cooperation and security. India will stress its interest in the Indo-Pacific as an increasingly connected pathway where much of the worlds trade passes, to be kept free from traditional and non-traditional threats to security to allow for free movement of goods, people and ideas. India will stress emphasise the importance of UNCLOS and international law, ASEAN’s central role and offer to actively participate in regional security.
In this context, India would like to cooperate with ASEAN in developing a blue economy, coastal surveillance, building offshore patrolling capabilities, hydrographic services, and information sharing for increased maritime domain awareness. Maritime domain awareness, aided by the India- aided telemetry stations in Vietnam and Indonesia, are crucial in protecting sea lanes of communication, and to meet the demand of the growing convergence between India and ASEAN in tracking the deployment of naval vessels and ships in the South China Sea.