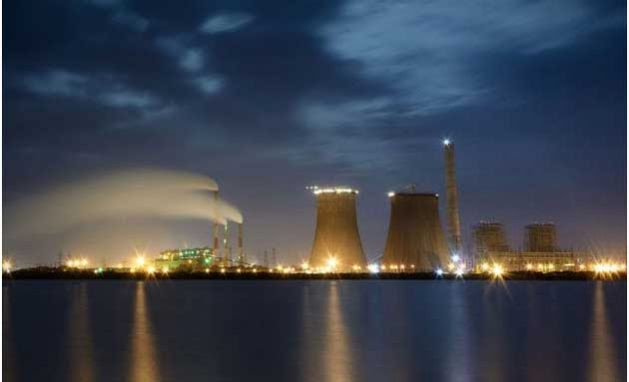 Tuticorin thermal power station. Credit: Begoon/Wikimedia Commons Water shortages are hurting India’s ability to produce power.
WASHINGTON DC, Jan 17 2018 (IPS) - New WRI research finds that 40 percent of the country’s thermal power plants are located in areas facing high water stress, a problem since these plants use water for cooling. Scarce water is already hampering electricity generation in these regions—14 of India’s 20 largest thermal utilities experienced at least one shutdown due to water shortages between 2013-2016, costing the companies $1.4 billion.
It’s an issue that’s only poised to worsen unless the country takes action—70 percent of India’s thermal power plants will face high water stress by 2030 thanks to climate change and increased demands from other sectors. 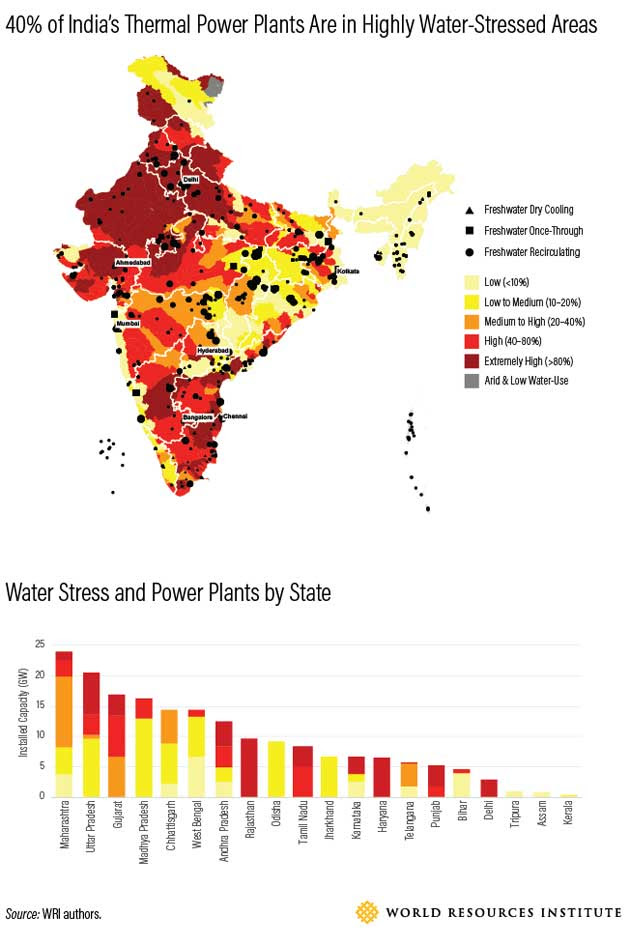 Billions of Tons of Freshwater, Consumed
Thermal power—power that relies on fuels like coal, natural gas and nuclear energy—provides India with 83 percentof its total electricity. While these power plants fail to disclose how much water they’re using in their operations, WRI developed a new methodology using satellite images and other data to calculate their water use.
What’s the Difference Between Water Withdrawal and Consumption?
• Water withdrawal: The total amount of water that is diverted from a water source (e.g. surface water, groundwater) for use.
•
• Water consumption: The portion of water that is not returned to the original source after being withdrawn.
•
Much of the water withdrawn by plants is returned to the lakes and ponds from which it came, but a lot is also consumed, and not returned to its original source. We found that almost 90 percent of India’s thermal power generation depends on freshwater for cooling, and the industry is only growing thirstier.
Thanks to increased energy demand and the growing popularity of freshwater-recirculating plants, which consume the most water of any thermal plant, freshwater consumption from Indian thermal utilities grew by 43 percent from 2011-2016, from 1.5 to 2.1 billion cubic meters a year.
To put this in perspective, India’s total domestic water consumption in 2010 was about 7.5 billion cubic meters, according to the Aqueduct Global Water Risk Atlas. That means power plants drank about 20 percent as much water as India’s 1.3 billion citizens use for washing dishes, bathing, drinking and more. 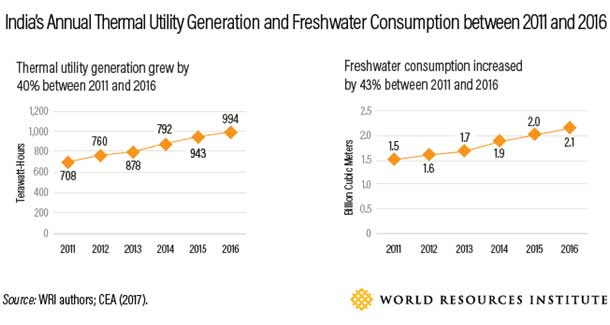 40 Percent of Thirsty Plants Are in Water-Stressed Areas
More than a third of India’s freshwater-dependent plants are located in areas of high or extremely high water stress. These plants have, on average, a 21 percent lower utilization rate than their counterparts located in low or medium water-stress regions—lack of water simply prevents them from running at full capacity.
Even when controlling the comparison analysis by unit age, fuel type and plant capacity, the observation was always the same: Plants in low- and medium-stress areas are more able to realize their power output potential than those in high water-stress areas.
Scarce Water Dries Up Revenue
There are practical and financial implications of power plants’ thirst. Between 2013 and 2016, India’s thermal plants failed to meet their daily electricity generation targets 61 percent of the time due to forced power plant outages.
The reasons ranged from equipment failure to fuel shortages. Water shortages were the fifth-largest reason for all forced outages—the largest environmental reason.
In 2016 alone, water shortages cost India about 14 terawatt-hours of potential thermal power generation, canceling out more than 20 percent of the growth in the country’s total electricity generation from 2015. 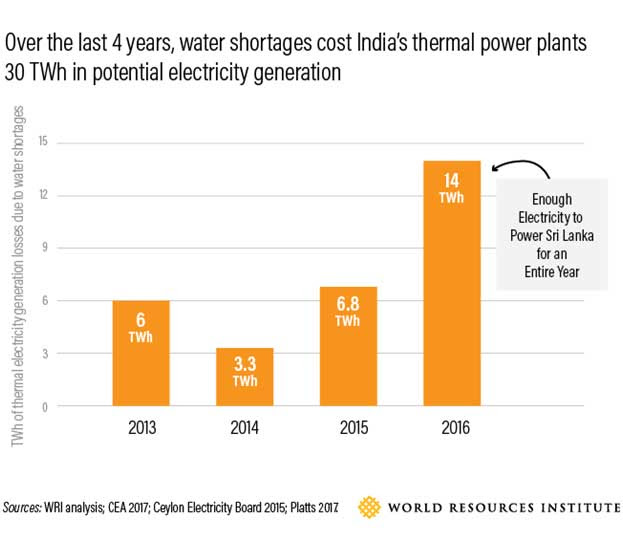 The Way Forward
As India develops, water competition will continue to grow and climate change will likely disrupt predictable water supply. Thermal utilities will become even more vulnerable to water shortages, power outages and lost revenue.
But there’s a better path forward: Upgrading cooling systems, improving plant efficiency, and ultimately shifting toward water-free renewables like solar photovoltaics and wind can all curb water risks to power generation.
It’s worth noting that the government of India already has plans in place that give reason for hope, such as the notification on power plant water withdrawal limits and the “40/60” renewable energy development plan. If these ambitious policies are enacted and enforced, our estimates show that India will save 12.4 billion cubic meters of freshwater from being withdrawn by power plants. That’s a year’s worth of showers for 120 million people – more than live in the Philippines.
But change won’t happen overnight. Even with proactive policies in place, the key lies in their implementation. In the coming years, the Indian government, utility companies and international investors all have a role to play in making the power sector more resilient to water risks.