2017 Was a Year of Record-Breaking Climate Events

Print | Send by email |En español
Kelly Levin, World Resources Institute, Washington DC
We’re only a few days into the new year, but it’s already off to an extreme start. 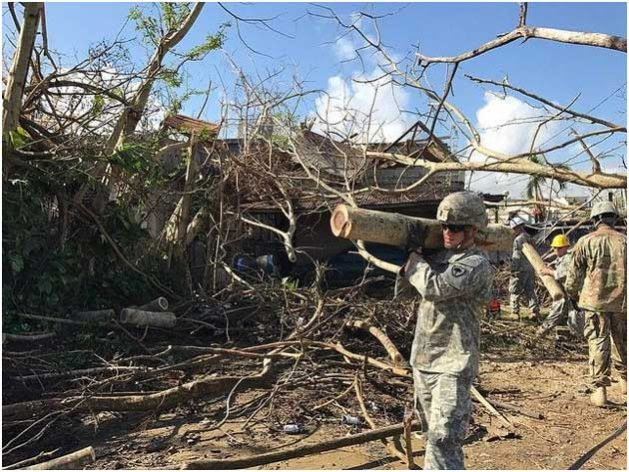 South Carolina National Guard clears debris from Hurricane Maria in Puerto Rico. Credit: Capt. Tammy Muckenfuss/U.S. Army
WASHINGTON DC, Jan 6 2018 (IPS) - Parts of the United States are experiencing blizzard and record low temperatures, with sharks freezing in the Atlantic and cold-snapped iguanas falling from trees in Florida.
The frigid, snowy conditions could be related to climatic changes—recent studies show that melting Arctic sea ice can disrupt the jet stream and push cold air south. Meanwhile, other parts of the world are currently experiencing warmer-than-average temperatures.
It’s reminiscent of the kinds of extremes we saw over and over last year. Across the world, extreme events hammered communities and smashed records, while scientists gained a better understanding of just how much climate change is fueling many of the disasters we’re witnessing.
We took stock of some of the most noteworthy impacts and scientific advances of 2017. One thing was clear: Climate change is creating conditions that put all of us at risk. 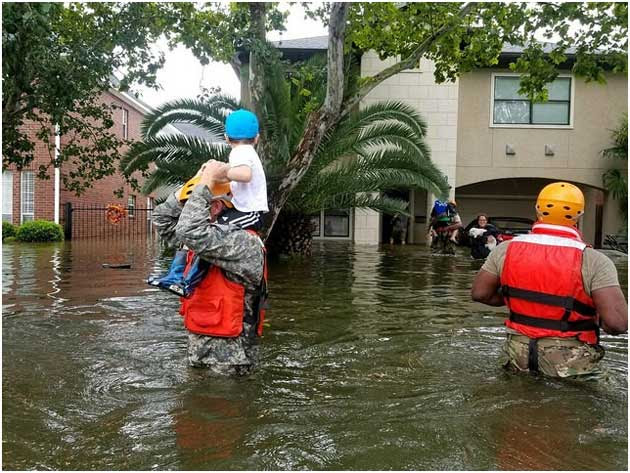 Texas National Guard soldiers help citizens evacuate during Hurricane Harvey. Credit: Lt. Zachary West , 100th MPAD/The National Guard
Temperature
• Although the year-end data have yet to be released, 2017 will likely be the third-warmest year in the 138-year record (possibly even the second-warmest, according to one report). Notably, it is on track to be the warmest year without an El Niño, a weather pattern that typically boosts average global temperatures. 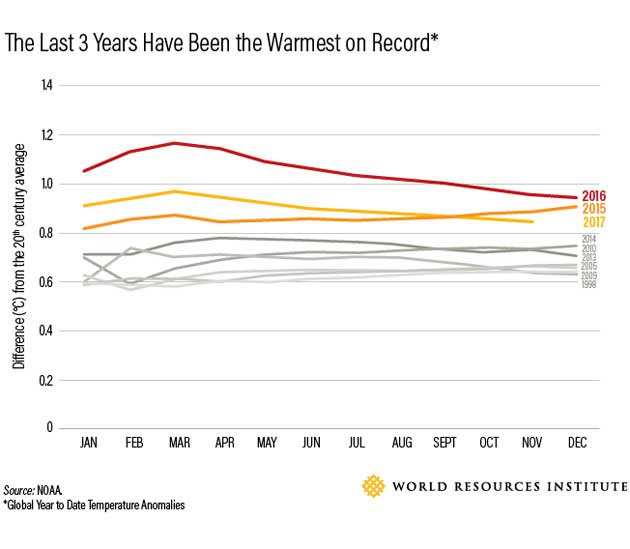 Extreme Events
• As of early October, there had already been 15 weather and climate disaster events in the United States with losses of more than $1 billion, tying 2016’s total and only one shy of 2011’s record number of “billion-dollar disasters.” 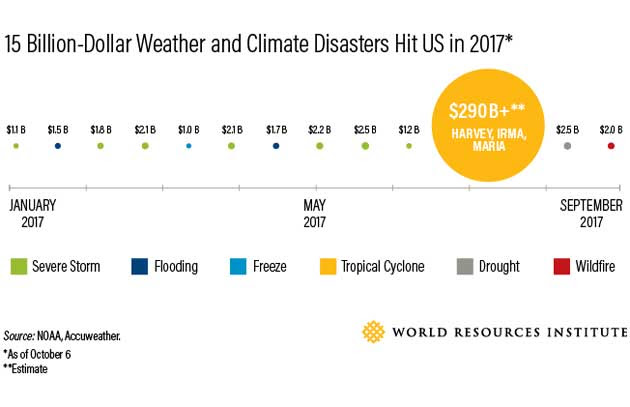 • California just experienced its largest-ever wildfire, causing at least 50,000 people to evacuate. This came on the heels of a wildfire in northern California only a few weeks earlier, which killed more than 40 people and destroyed at least 8,400 homes.
• Hurricanes came in rapid succession, including Hurricane Harvey (with flooding from storm surge and extreme rainfall that left nearly 800,000 people in need of assistance), Hurricane Irma (the strongest in the Atlantic since Wilma in 2005) and Hurricane Maria (the strongest hurricane to make landfall in Puerto Rico since 1928). Scientists are at work researching the role of climate change in these events, but have already found that human-induced climate change likely increased the chances of Harvey’s heavy rainfall by at least 3.5 times and its intensity by almost 20 percent.
• East Africa fell deeper into a humanitarian crisis due to devastating drought, compounded with conflict, with millions going hungry.
• Australia broke more than 260 heat and rainfall records and witnessed its warmest winter on record.
• The 2017 Bulletin of the American Meteorological Society found that scientists are increasingly able to discern whether climate change is impacting extreme events. The report reviewed work from 116 scientists from 18 countries and found that multiple extreme events in 2016—such as the extreme heat across Asia and a marine heat wave off the coast of Alaska—could not have even been possible without human influence to the climate. Another noteworthy publication found a connection between the severity of a number of extreme events and climate impacts to the jet stream.
Sea Level Rise
• Scientists mapping Greenland’s coastal seafloor and bedrock found that 2 to 4 times as many coastal glaciers are at risk of accelerated melting than previously considered.
• In Antarctica, scientists for the first time documented widespread movement of meltwater and large-scale surface drainage systems, which could send water to areas of ice shelves already vulnerable to collapse and accelerate future ice-mass loss. 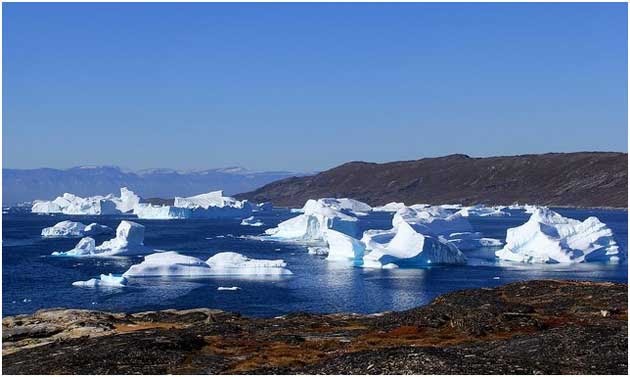 Glaciers in Disko Bay, Greenland. Credit: twiga269 ॐ FEMEN/Flickr
Ice
• Scientists determined that the extent and rate of Arctic sea ice decline is unprecedented for at least the past 1,500 years. 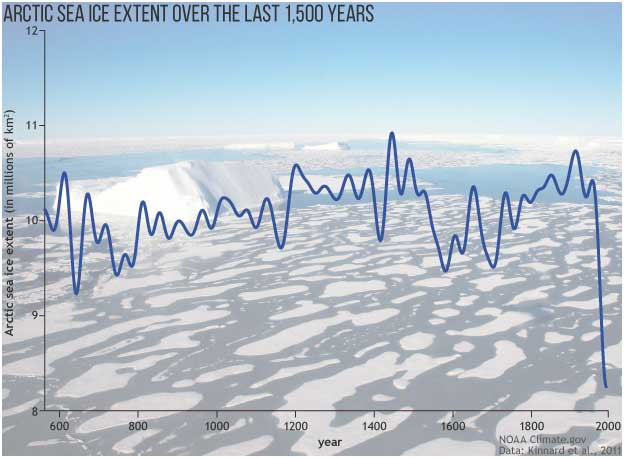 Graphic by NOAA Climate.gov, Kinnard et al., 2011
• Arctic sea ice dipped to its smallest maximum extent ever recordedduring the month of March (it has been dropping about 2.8 percent each decade since 1979). Additionally that month, there was less than one percent of older sea ice (lasting longer than four winters), which is much more resistant to melt than new ice.
• Although summer ice extent in Antarctica has been generally growing over the past years, in 2017, scientists recorded the lowest summer ice extent ever. Scientists will need several more years of data to understand whether this was due to variation alone or indicative of more systemic changes.
Greenhouse Gas Emissions
• The World Meteorological Bulletin found that concentrations of carbon dioxide – 403.3 parts per million (ppm) in 2016 – were the highest in at least 800,000 years and were 45 percent higher than pre-industrial levels. The last time Earth experienced comparable concentrations of carbon dioxide was when sea level was 10-20 meters higher than today and global average temperature was 2-3°C warmer. While it’s too early to tell what 2017’s annual concentrations will be, for the first time, the Mauna Loa Observatory recorded readings exceeding 410 ppm.
• The Global Carbon Project and University of East Anglia found that 2017 experienced the highest levels of carbon pollution on record, reversing course on a flattening of carbon dioxide emissions from fossil fuels and industry over the past three years. 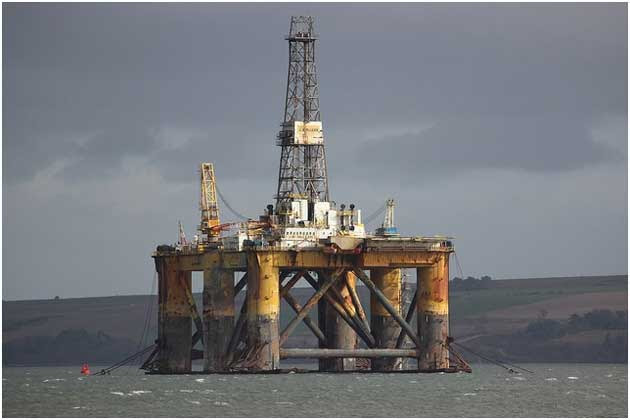 Scotland oil rig. Photo by Steven Straiton/Flickr
Ecological Disruption
• Scientists discovered that tropical forests may have reached a critical threshold — turning from a carbon sink, where they suck up more carbon dioxide from the atmosphere than they emit, to a carbon source, thanks to deforestation, degradation and other land use changes. 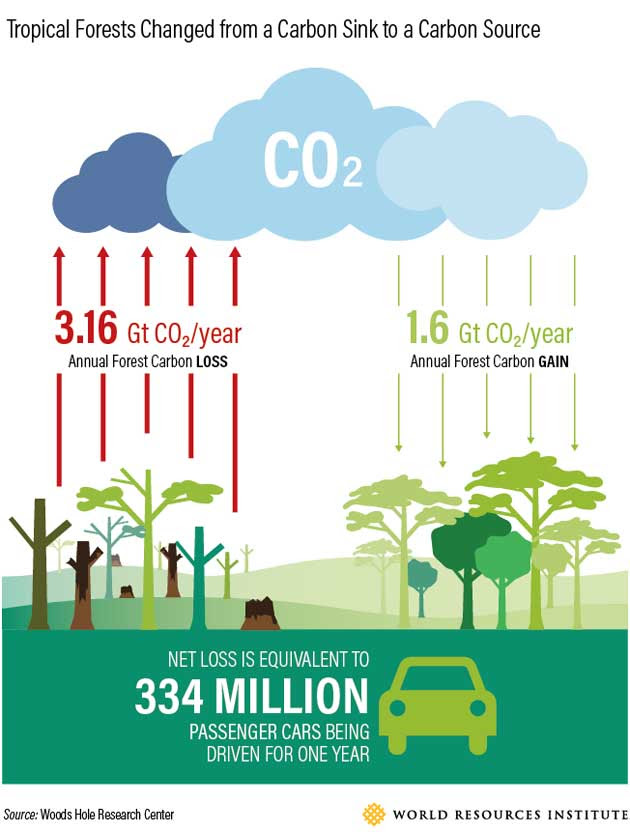 • Permafrost temperatures were warmest on record in 2016, and preliminary data suggest they will be for 2017 as well. This warming could cause permafrost ecosystems to thaw, destabilize and release greenhouse gases locked inside.
• A study published in Nature found that ecosystems have taken longer to recover from droughts, especially in the tropics and northern high latitudes, than ever before. Recovery time is a signal of ecosystem resilience; compromised recovery could lead to widespread tree death.
• Scientists found that previous estimates of climate change’s impacts on species were highly underestimated — almost 1 in 2 threatened mammals and 1 in 4 threatened birds have already been negatively impacted by climate change in at least some part of their range.
We Need to Reverse Course
It’s clear that trends are headed in the wrong direction. But 2018 brings a fresh start, and an opportunity to learn from 2017 and the record-breaking years that came before it. May this new year bring a new resolve to reverse course and take actions that move toward a low-carbon future.